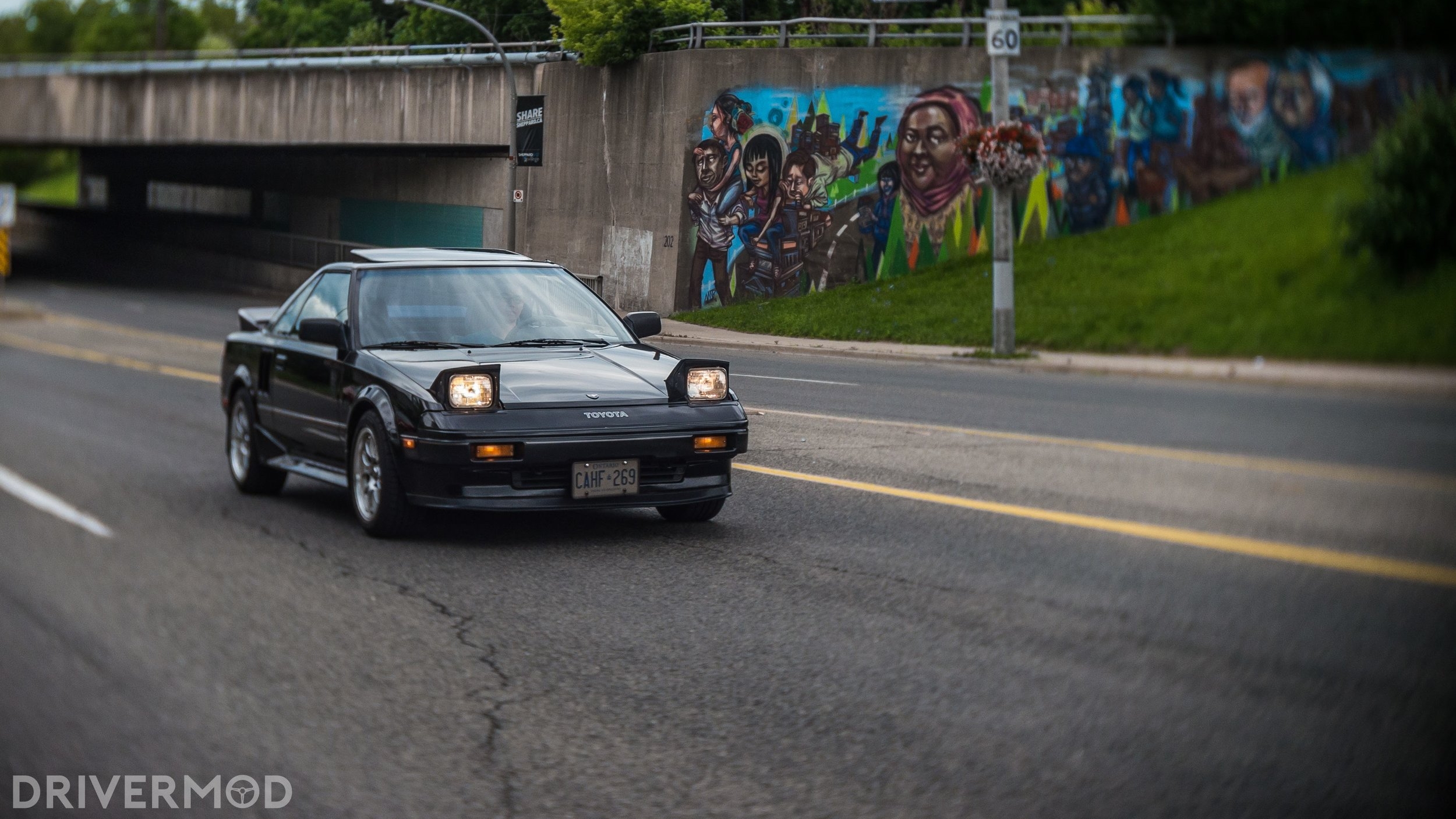 The AW11 Toyota MR2 Is Not a Hardcore Sports Car, And That’s Okay

“Instead, it holds the honour of being one of the most charismatic and intrinsically enjoyable driver’s cars I’ve driven.”

When you’re a broke college kid shopping for a cheap sports car, everybody and their mother will tell you to buy a Miata. And yes, you probably will buy a Miata. S2000s are too expensive, 240sxs are either expensive or rusty, BMWs are a pain to work on and their parts are expensive; you’ve heard the usual rhetoric. None-the-less, you’ll clench your fists and stand your ground. “Everyone has a Miata! That’s not a real sports car! Look at it, it’s so ugly!” And you’ll stomp upstairs to your room, slam the door, hop on your computer, and type these carefully selected characters into your web browser: AW11 Toyota MR2. 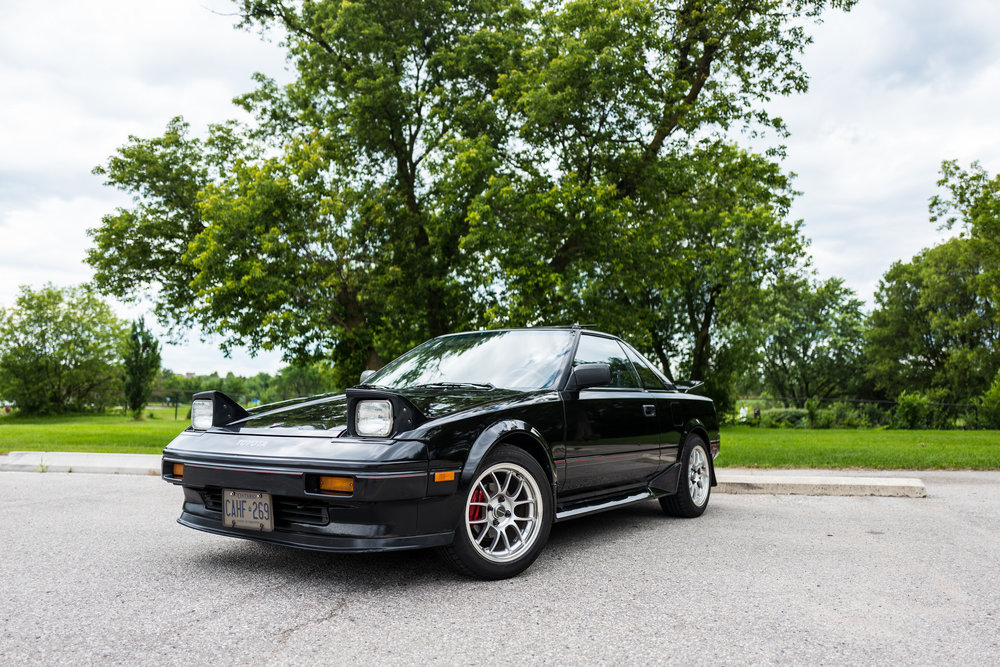 And why not? At around 2,300 lbs, it’s light, like a Miata. It also has a rev-happy 1.6-litre engine; like an early NA Miata. And, like a Miata, they’re cheap. Tavis bought this beautiful example, with just 94,000 km on the clock for $4500. But, there’s a very important distinction: it’s mid-engined. If that alone isn’t enough to get you interested, I don’t know how you found this website. 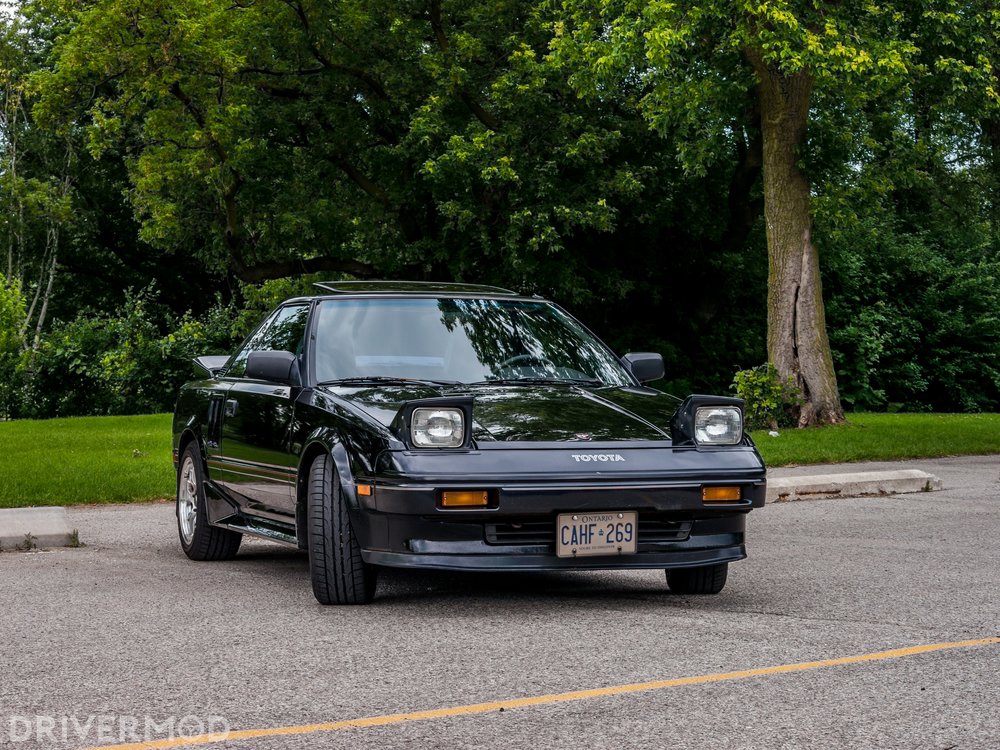 And look at it. Complete with 1980’s wedgy-ness, sharp lines and pint-sized wheelbase, it’s beautiful.  While an NA Miata looks like a scared child who’s just stumbled onto the stage during his first school play, the AW11 just looks happy to exist. It’s for these reasons, that I’ve been searching for an AW11 for years. And like clockwork, whenever my Miata is being a pain in the ass (read: often), I throw my hands in the air, hop on Kijiji, and search for Toyota MR2s. 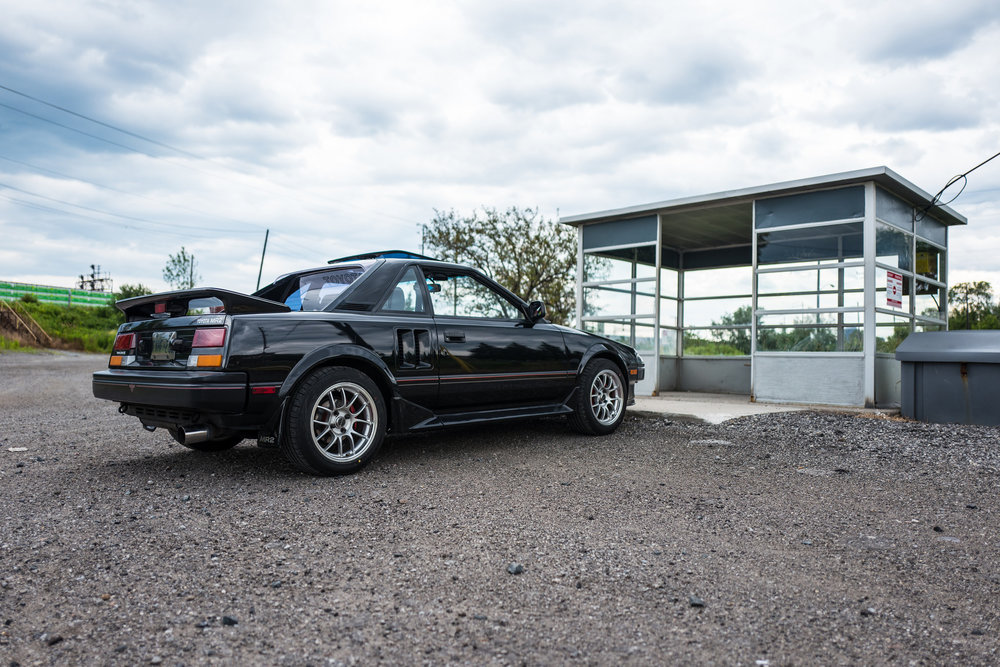 And that was what I had in mind when Tavis handed me the keys to his 1986 MR2. And from the get-go, it was apparent that this is no Miata-competitor. Unlike the Miata, everything on the MR2 has a heft to it. The front hood, the engine cover; it’s all made of stamped steel. The doors close with a clunk. The headlights are glass sealed beams. To the contrary, the headlights on my NB Miata feel like they’re made of fisher-price-toy plastic and its hood weighs as much as a dinner plate. The AW11 comes from an era where “fuel-injected” was a cool thing to put on your trunk lid, and you’re reminded of that everywhere you look. More importantly, you’re reminded of that in the way it drives. 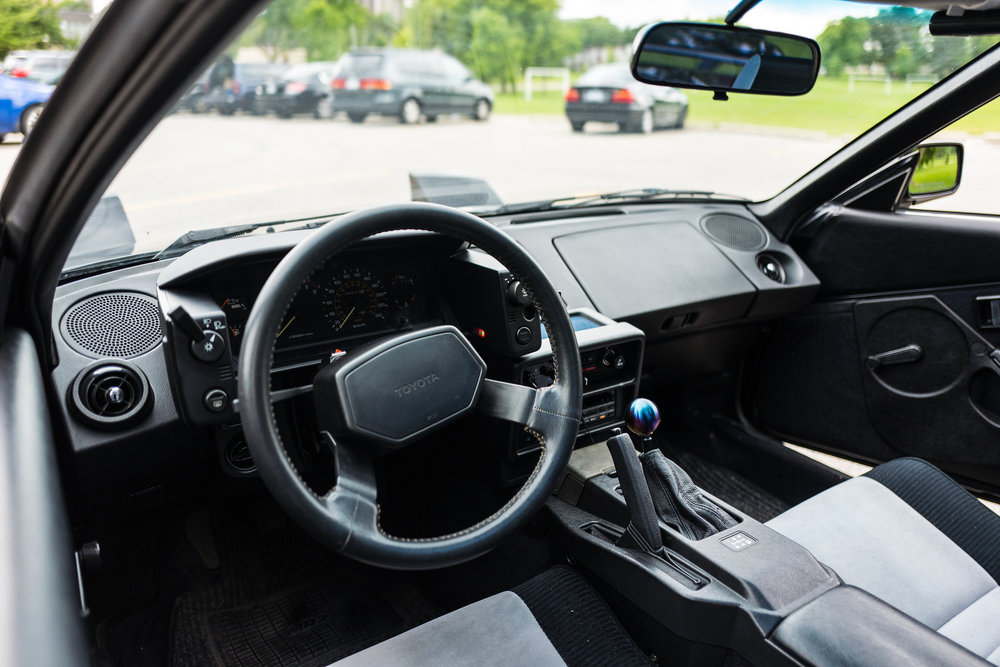 The driver’s controls wrap around the gauge cluster like a fighter jet, reminiscent of a Nissan 300zx. The steering rack is slow, but that’s a bit of a blessing given the AW11’s lack of power steering. It has some of that old car on-center play, but all of that disappears however when you crank the wheel into a corner, and the steering loads up nicely. The shifter slots into each gear with a satisfying click, but given that the shifter is connected to the transmission using cable, rather than mechanical linkages, it lacks the bolt action precision you’d expect from, you guessed it, a Miata. 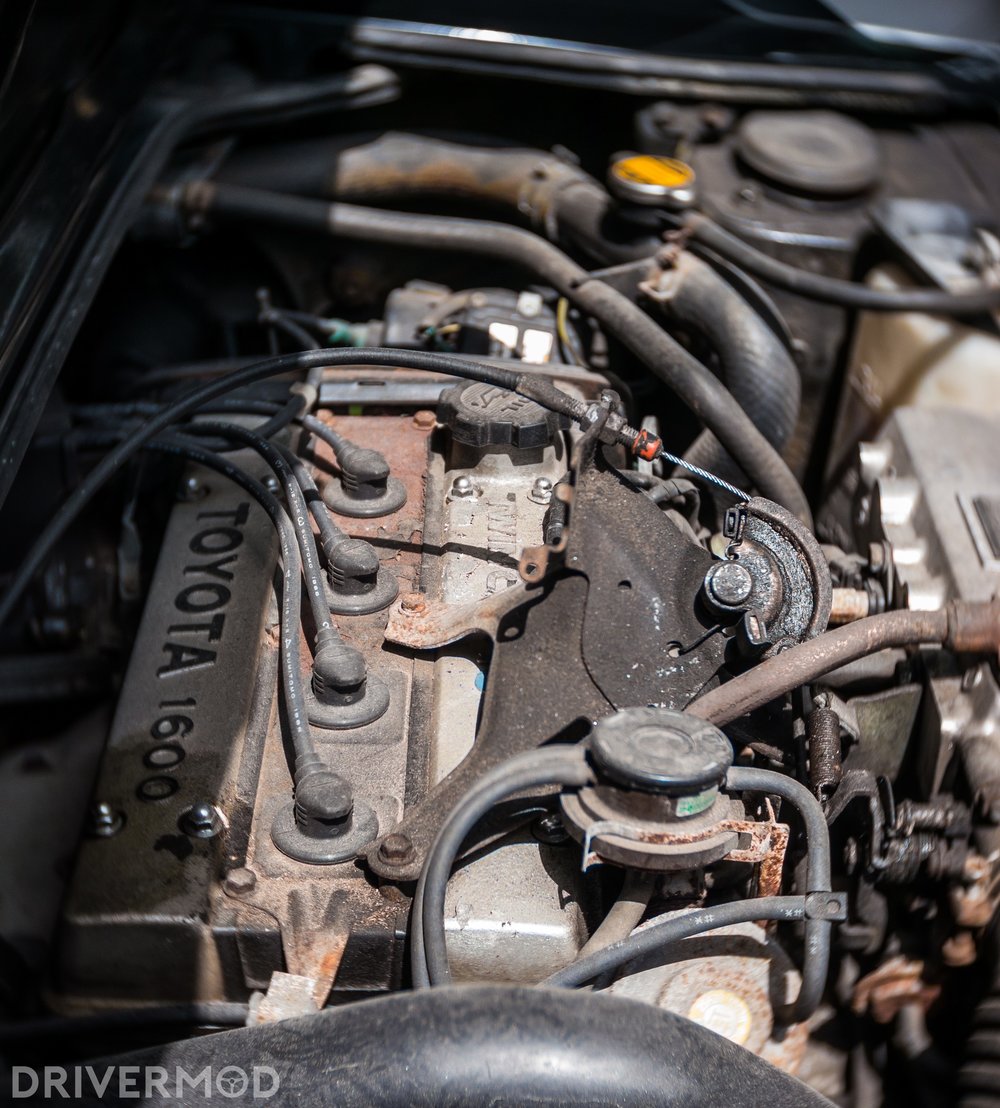 Then there’s that engine. I could string together hyperbole and say that “what the 4AGE lacks in torque, it makes up for in character”, but I won’t mince words; the AW11 is slow. That’s okay though, because it gives you plenty of time to enjoy the sound of musical 4AGE right behind your head as it rises to its 7,600 rpm redline.

It’s about time we address the metaphorical elephant in the room; that mid-engined layout and snap oversteer, and that by far is the most interesting thing about the AW11. When you turn the wheel, the first thing you’ll notice is how light the front of the car is, giving it excellent turn in. But there’s plenty of FR cars with good turn-in (read: Miata). What’s different is where it rotates: behind you, which means you don’t get that ‘rotation in your butt’ sensation. It’s interesting, but it’s also a problem because it makes it more difficult for a novice to know what the rear wheels are doing. That’s when you end up with this: 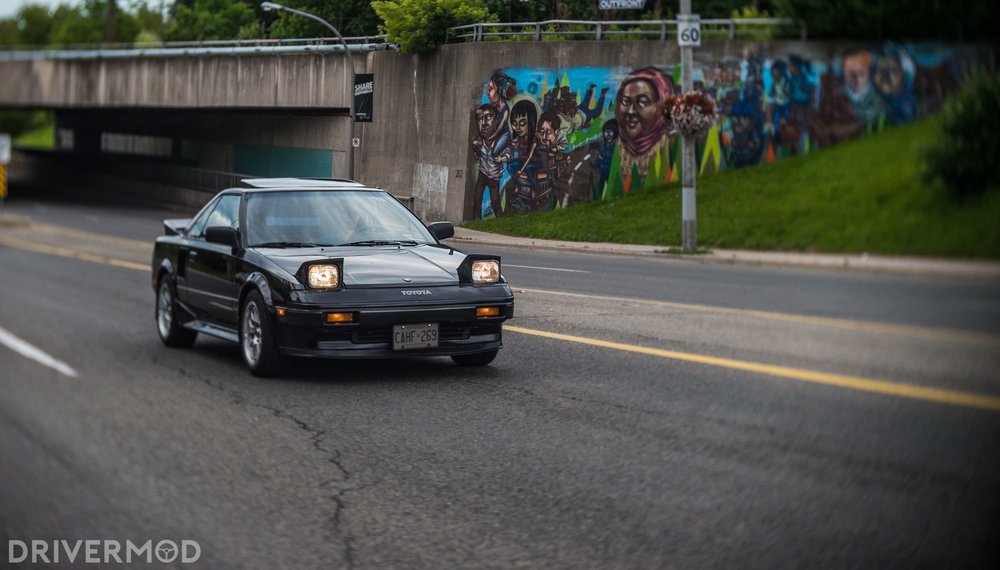 But to its credit, the AW11 does give you warnings. The steering loads up, you can feel weight shifting around the car, tires chirp. This is, after all, a very communicative Japanese sports car. The problem is that when you do cross that limit, things go south, fast. In a similar FR car… a Miata for example, you can essentially counter steer and stay on the gas pedal, and there’s a good chance that the only cleaning up that’ll be required will be in your passenger’s pants.

What’s most difficult to describe, is why I’m so madly in love with this thing. Because in case you’ve been following, it’s worse than the Miata in virtually every way. It’s slower than a Miata, it’s heavier than a Miata, it’s communicative, but not to the same degree as a Miata, and while a Miata can be tossed around on wet roads with questionable tire tread, you’d be risking life and limb doing that in an AW11. 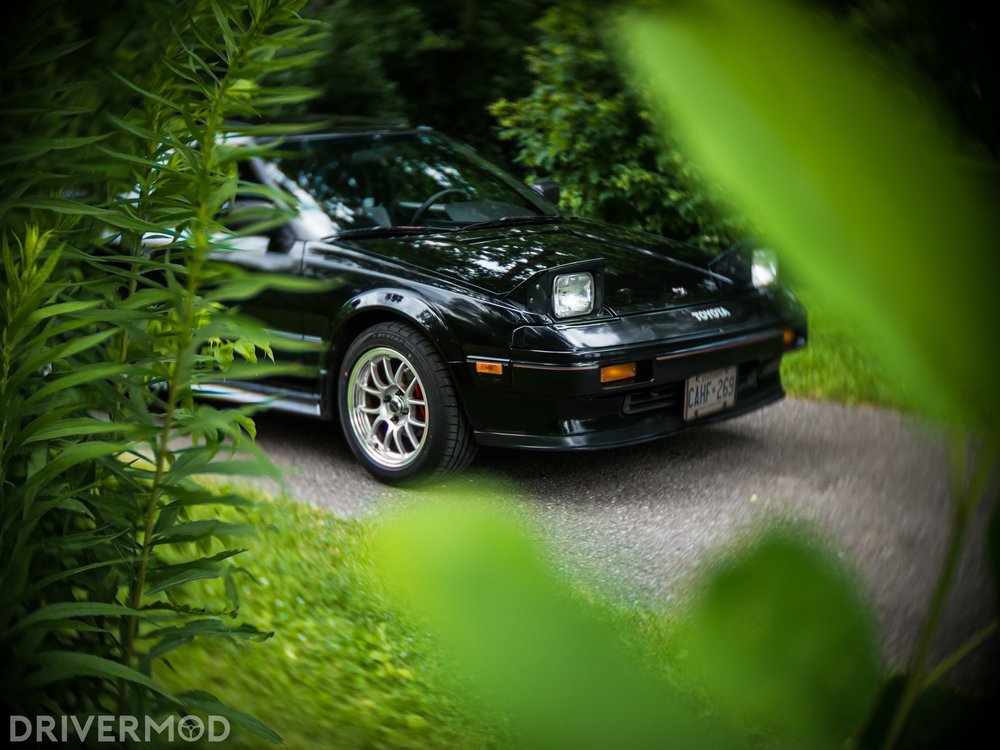 But all of this can be forgiven, because this is not a hardcore, feather-weight sports car. I do not want to take this thing to a track day. I want to take this car on a road trip. I want to drive through a California mountain pass at five-tenths listening to the 4AGE sing behind me, with a Depeche Mode cassette jammed into the radio. I want to drive my girlfriend to the beach, park the AW11 on the sand and watch the sunset. Then open up those adorable pop-up headlights and drive home in the dark. It’s just a simple, beautiful car for doing normal car things. And I would argue that it’s better at doing normal car things. Sure it has a small trunk, but you know what has a smaller trunk? A Miata; seriously, the AW11’s trunk has 1.8 cubic feet more room than an NB Miata’s, and you get an additional 4.6 cubic feet of space in the “frunk”. More importantly, it has a fixed roof so you can actually hear yourself think at highway speeds, and a significantly less cramped interior. Who says DriverMod doesn’t give great consumer advice?

The AW11 is not a hardcore feather-weight track day weapon. Instead, it holds the honour of being one of the most charismatic and intrinsically enjoyable driver’s cars I’ve driven.

In any case, Tavis, if you’re reading this.

If you ever decide to sell it, call me.

A huge thanks to Tavis Wong, who not only let me drive his precious AW11 MR2, but shot some of the awesome pictures you’ve seen in this article. You can find him on Instagram here: @travis.without.the.r