It’s been an interesting summer in the FRS/BRZ track-day community. In the spring I was arguing with my friend Val about whether or not a 1:24 around our home track; the Toronto Motorsports Park, was even possible. Then my friend Patrick laid down a 1:24.6 in his very-stock FRS. Later I managed a 1:23.91 in my equally stock FRS, which was destroyed by our friend Daniel (another stock-suspension FRS) laying down a blindingly quick 1:22.64. The question is then, how. 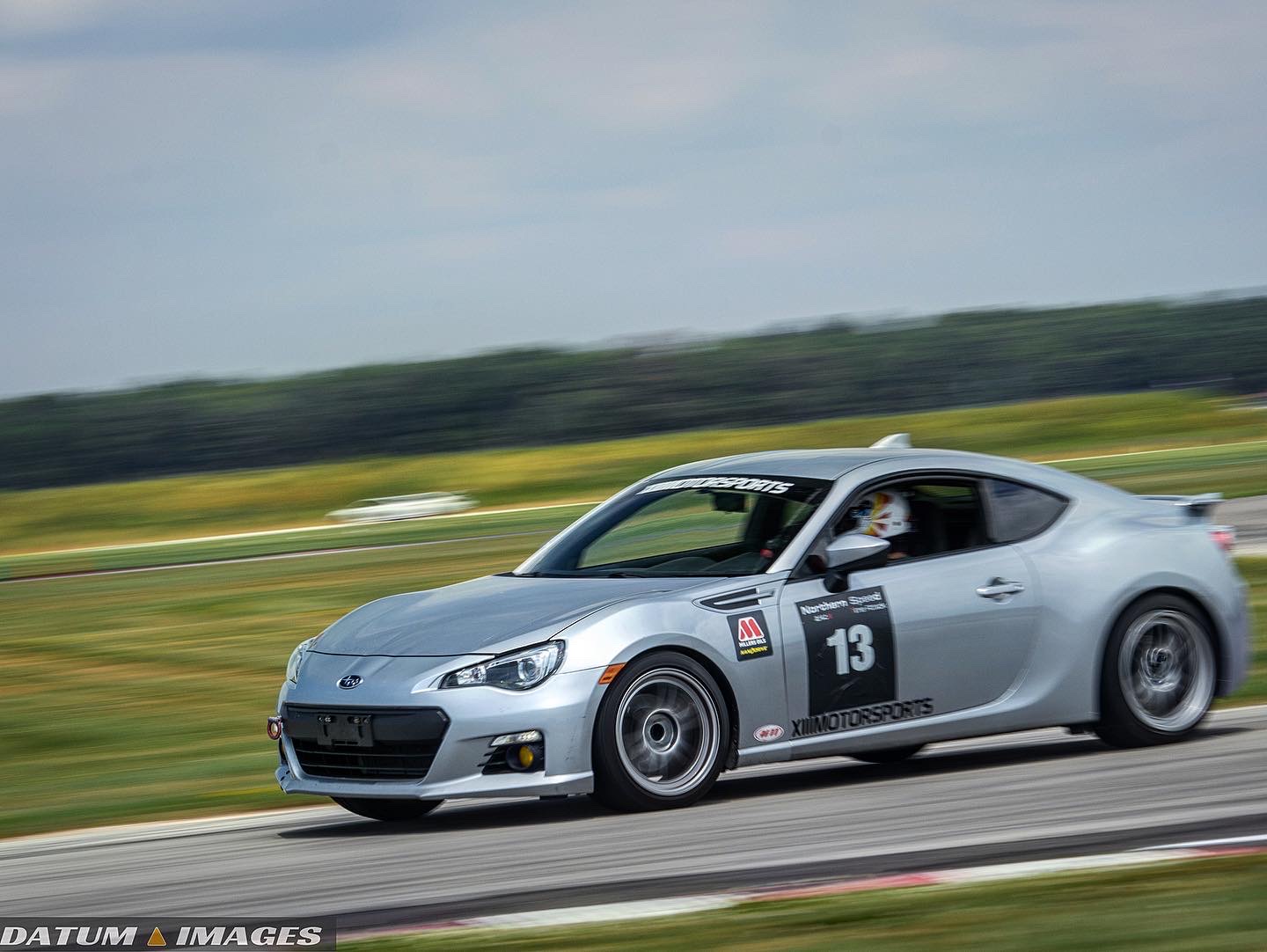 A wise man once told me – when it comes to setting a fast lap time, instruction will only get you about 80% of the way there. If you want to figure out that final 20%, you need to look into the data. I’ve been recording data using an app called RaceChrono combined with a 10hz external GPS sensor and an OBD2 scanner. Daniel is using an AIM Solo 2 DL – getting him 10hz GPS coverage, and lightning-fast OBD2 data. I can then overlay those two laps using a desktop app called TrackAttack and look at differences in line, throttle position and speed in order to find those 1.3 seconds.

Turn 1 at TMP is a set corner, so the objective here is to carry as much speed as possible through the corner, into the next straight.

The first notable difference is that Daniel is braking earlier; as evidenced by the green throttle position line dropping down first. More importantly, his braking is smoother as evidenced by our GPS speed – you can actually see where I released some pressure while downshifting into third. As a result, I missed the apex, reducing the radius of the corner and losing speed. I was able to get back on the gas earlier – but alas, I lost over a tenth in just this corner. 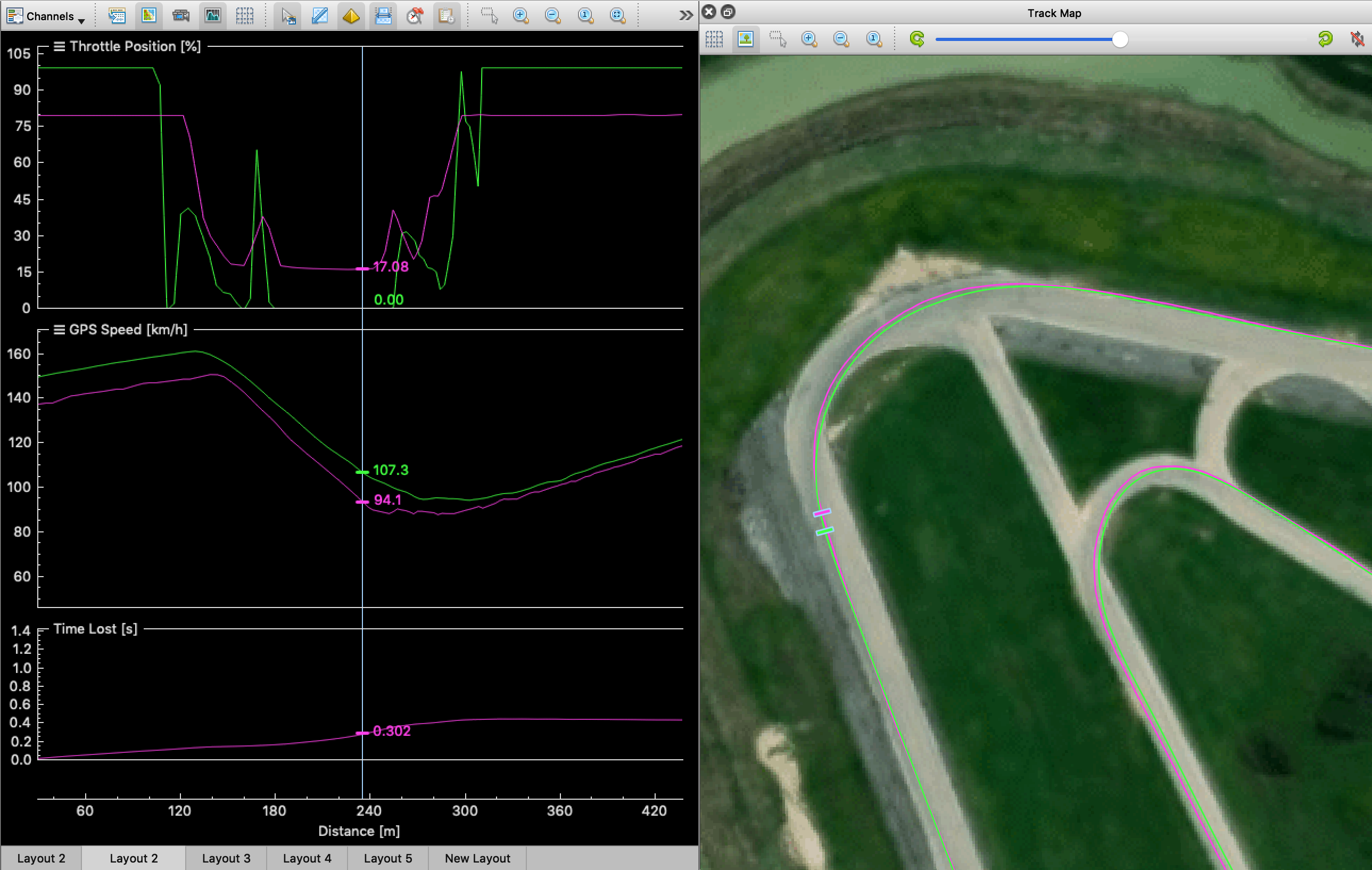 Turn 2 is immediately followed by a tighter section – so entry speed is more important than exit speed. The first thing worth pointing out is that I begin drifting to the right under braking, artificially tightening the turn. As a result of that, I’m carrying a lot less speed into turn 2 than Daniel. I’m also generally over-slowing the car through here. (I.e., Daniel is braver)

That’s a simple fix on paper – but people have rolled their cars going off turn 2 sideways. So again, bravery. By the time we hit the exit of turn two, Daniel is 0.4 seconds ahead. 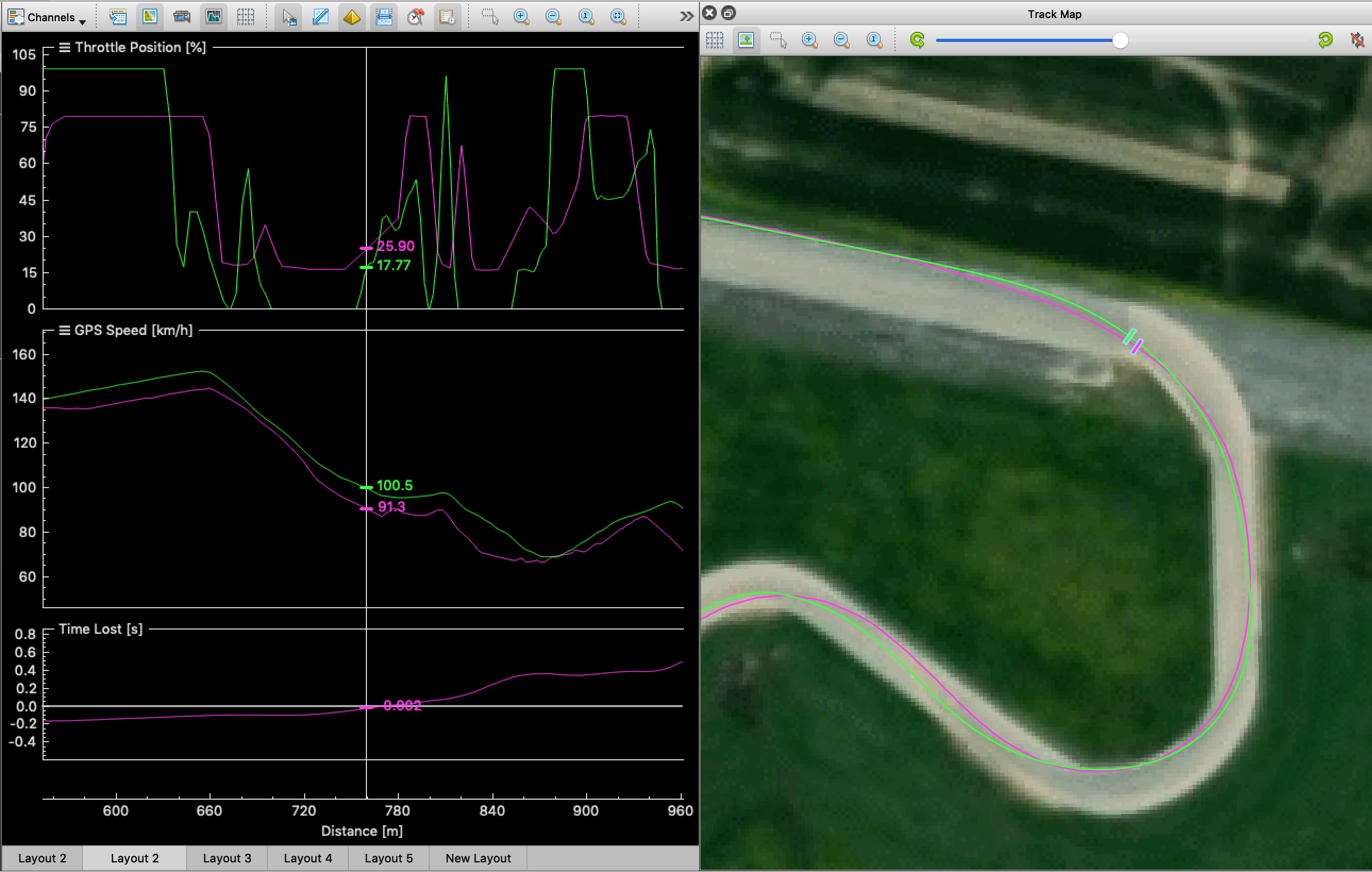 This next series of turns are a bit of a toss-up.

I’m able to get on the gas a little earlier entering 3 and we both hit the apex at nearly the same speed. I take a tighter line coming out of 3 into 4 which allows Daniel to carry a lot more speed out of turn 3.

However, that tighter line sets me up for a later turn 4 apex. As a result, I’m able to get on the gas earlier and exit both four and five at a higher speed. That matters, because turn five is preceded by a straight.

He’s faster out of three, I’m faster out of 4, 5 and through the next straight. Coming into turn 6, Daniel is still about 0.4 second ahead (no time gained or lost) – if there’s a way to combine both these lines, there’s speed to be found here. 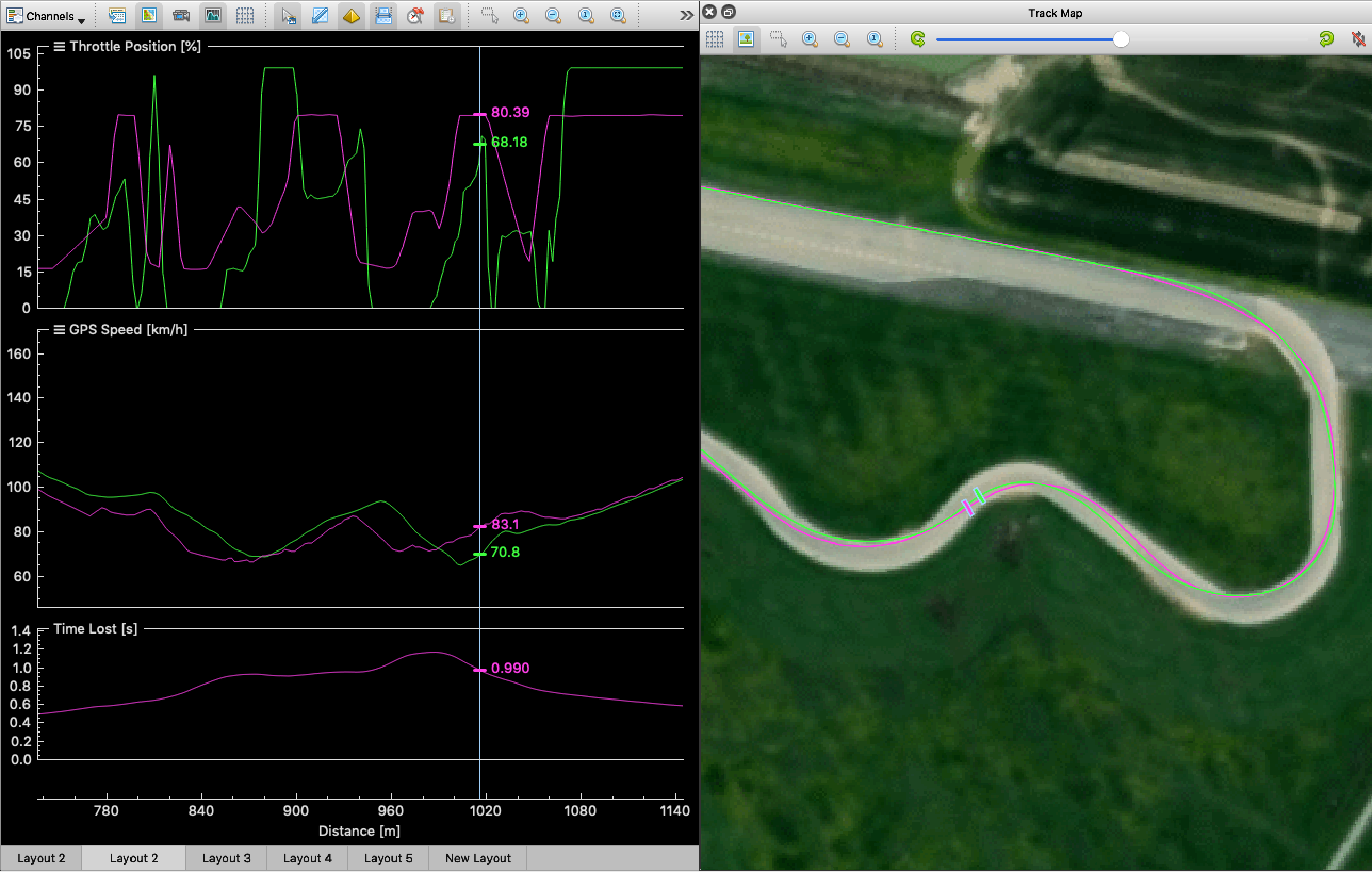 When I first looked at this corner, I thought I might be faster. I’m braking earlier, using more of the track and apexing later; which lets me get on the gas earlier and exit the corner faster.

But look at our speeds – Daniel’s travels straight up and down, like a v. My speed drops down and hangs before acceleration starts again. I’m braking too early and coasting.

As a result, I might be traveling faster down the next straight, but I’m now 0.660 seconds behind Daniel by the time we get there. 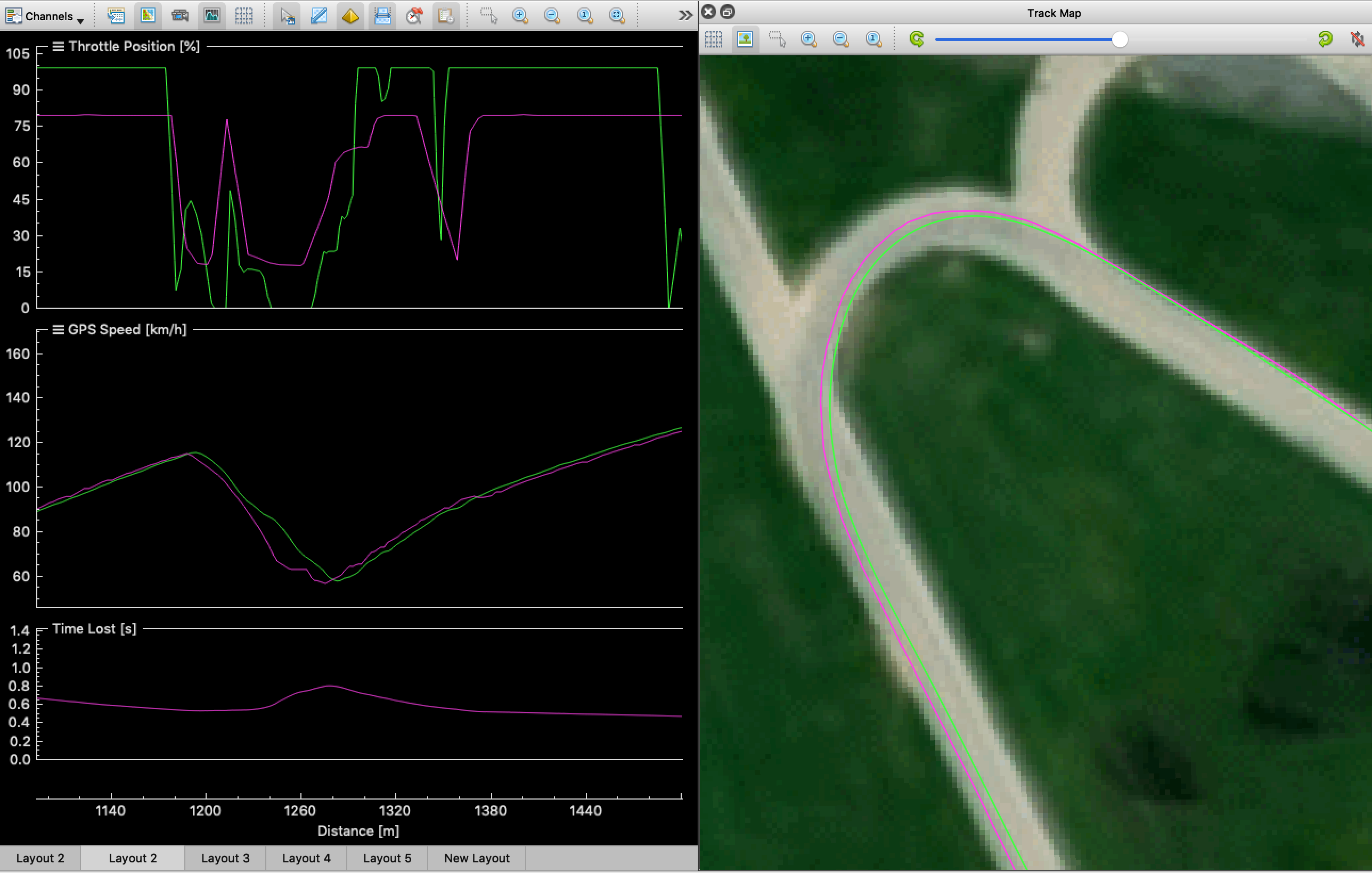 Turns 7 and 8 are really more of a kink than a distinguishable set of turns. The goal here is to optimize for entry speed into turn 9 (as you’re coming from a straight), without compromising exit out of nine, and entry into turn 10 as a result.

I do this by braking late into turn 9, hitting the apex early and allowing the car to swing all the way to the right before tucking it back to the left before entering 10. Daniel manages to enter turn 9 at the same speed, and carry significantly more speed through it. He does this in two ways.

First, he brakes a touch earlier and holds the car to the right before diving for the apex. That increases his cornering radius (allowing him to carry more speed) and allows him to apex later so that he can get on the throttle earlier. You can see in the image below that he’s applying 100% throttle right over the apex. Not only does that allow for wicked exit speed, but it also helps with rotating the car.

As a result, this corner is disastrous for me. I’m now 0.7 seconds behind and in a worse position to enter turn 10. 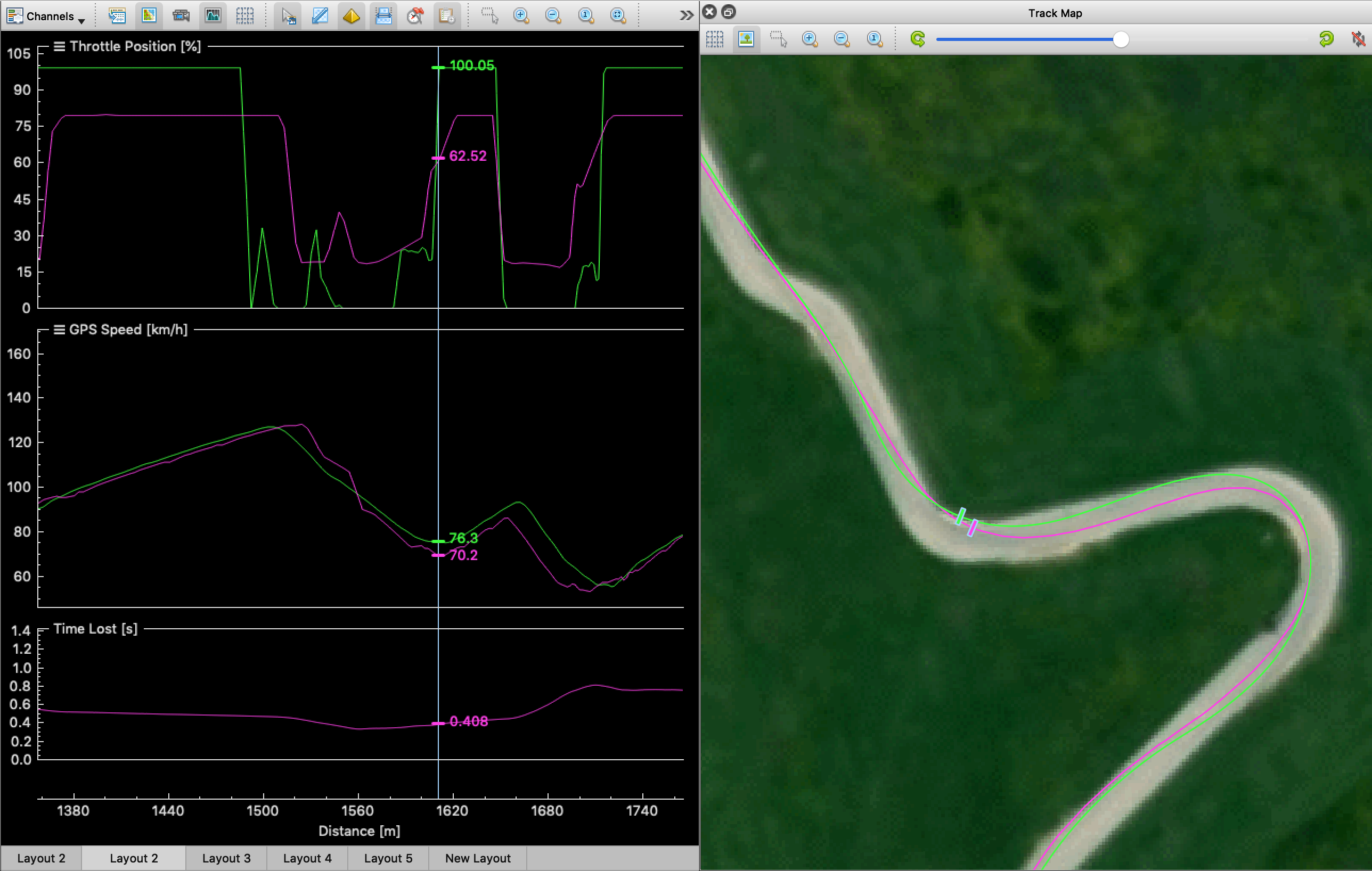 Turn 10 is frustratingly important. It’s important because it leads into what is in a low-horsepower/high-grip car effectively a straight. It’s frustrating because it’s slow.

Daniel and I effectively take the exact same line through here. The difference is that he’s in a much better position under braking thanks to his exit out of turn 9. He’s straighter and further left, allowing him to brake over 10 meters later.

That alone means that he’s now 1.165 seconds ahead by the time we hit the apex.

I use throttle here to help rotate the car. I’m back on the gas earlier and accelerate faster down the next straight. That buys me some time, but Daniel is still 0.8 seconds ahead when we hit the next braking zone. 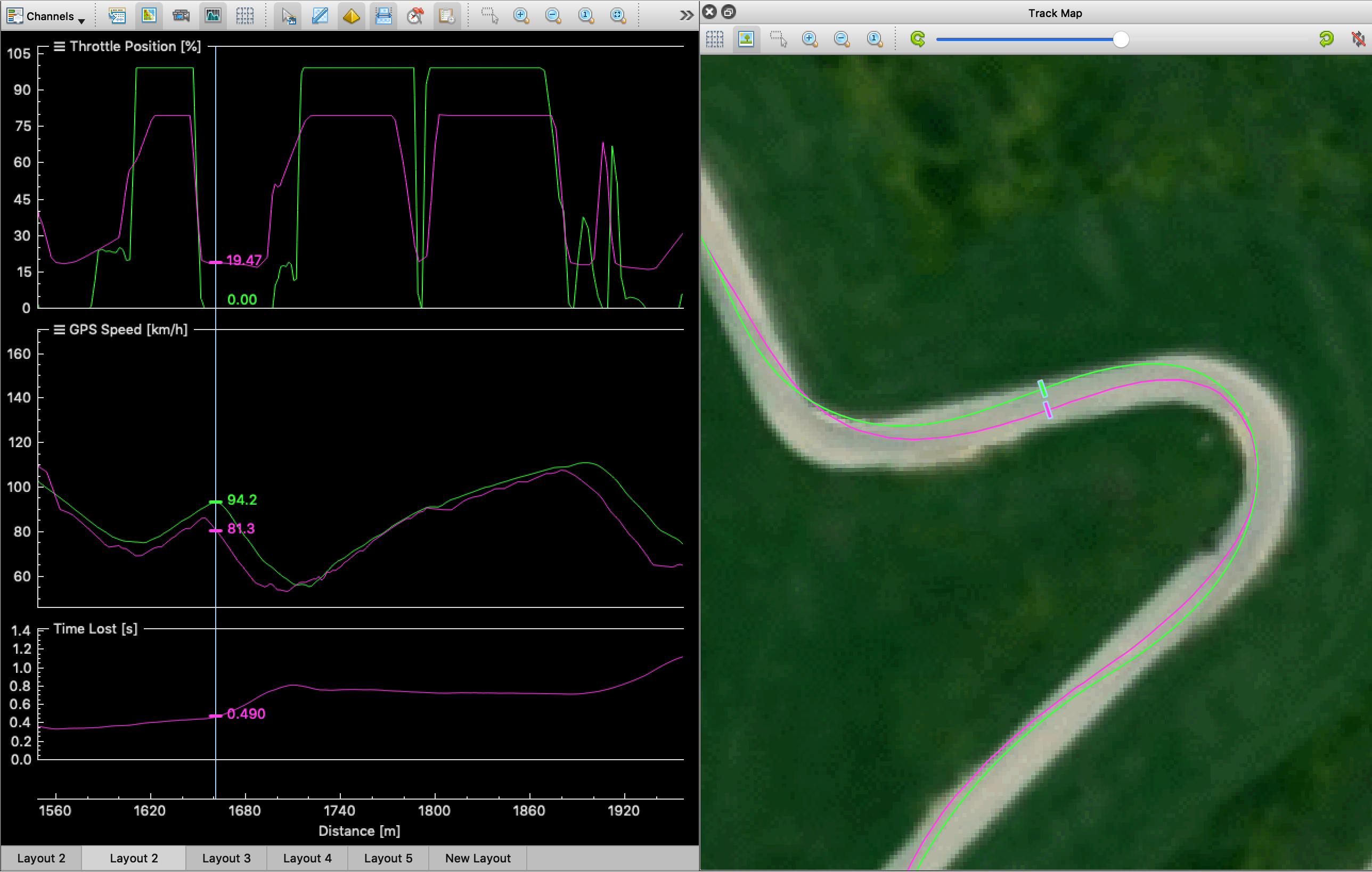 I typically treat turn 11 as a throwaway corner, as getting turn 12 right is exponentially more important (as it leads into the front straight) than being fast through turn 11.

While that’s true – being fast through turn 11 doesn’t hurt, and Daniel is a lot faster through 11. On entry, he uses more of the track by placing the car further left. He’s also braking less and carrying more speed through the corner (he hits the apex at 75kph vs. my 64kph).

A big part of that is sheer bravery and confidence – going fast through 11 involves driving at the limit close to very imposing walls.

His line through 11, however, does slightly compromise his entry into 12. By apexing 11 earlier and slowing the car more, I’m able to apex 12 later and get on the gas earlier. As a result, I hit the front straight at a slightly higher speed.

That’s not to say I’m faster through here. The additional speed carried through 11 more than makes up for his delay getting on the gas. Daniel picks up 0.3 seconds in these two corners. 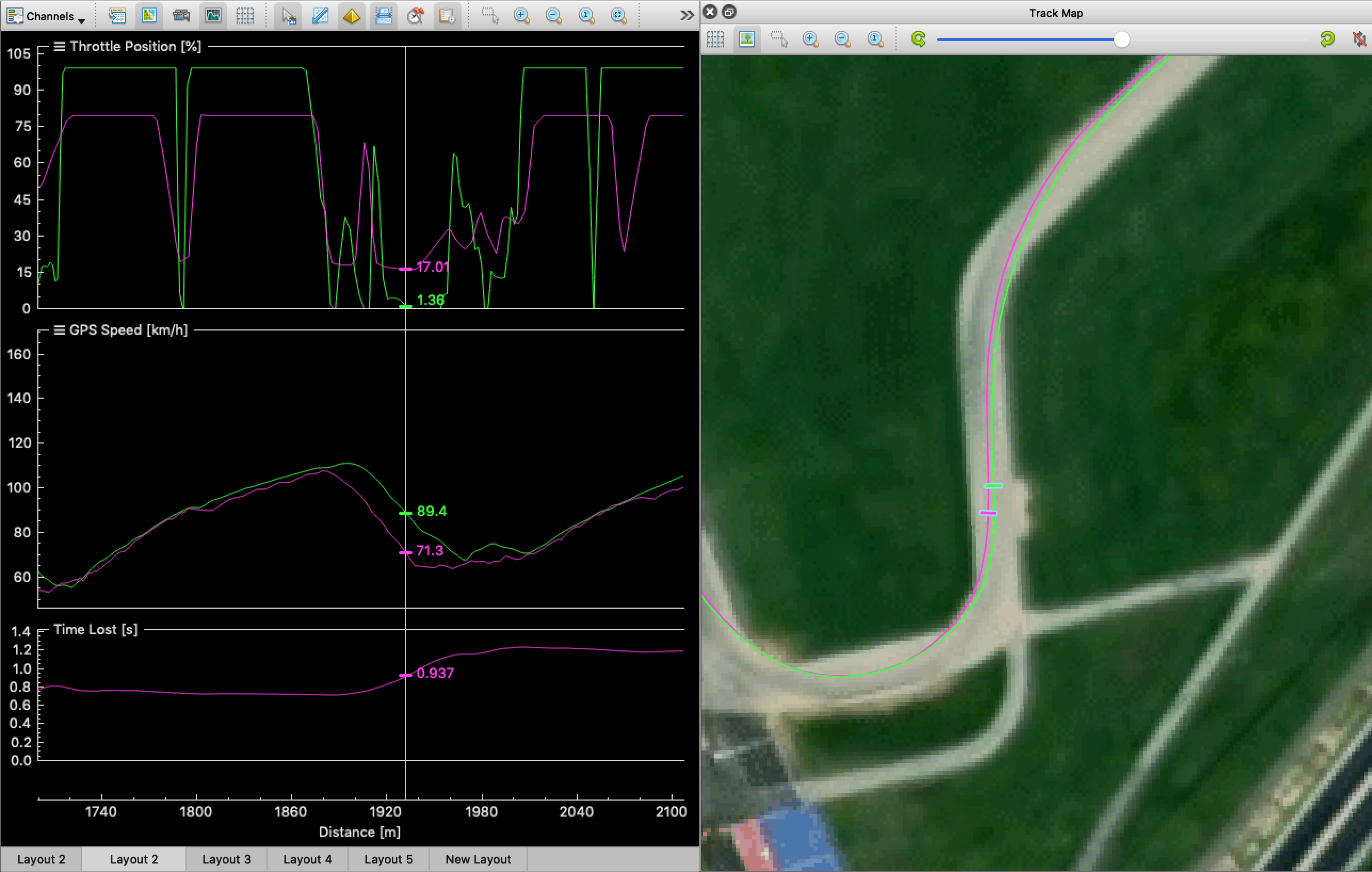 In some places (turns 1, 2 and 9) I need to tweak my line, in others I need to carry more speed through the middle of the corner (turns 2, 6 and 11). I also need to shift faster in general as it’s costing me speed literally everywhere (Daniel’s shifts are noticeably faster).

Daniel can benefit from getting on the gas earlier when exiting turns 6, 10 and 12, but as you’ve probably already figured out – he’s driving a really solid lap.

Daniel’s optimal is in the 1:21s, while mine is a 1:23.5. I’m also catching myself wondering how much his additional front camber, (aiding with turn in) more aggressive brake compound and bucket seat contribute to his speed. I rolled off my 1:23.9 lap with my front brakes literally smoking, and my knees are getting increasingly sore from the bracing required to hold myself in the stock seat.

But the real question is – if we’re getting so deep into the low 1:20s on stock suspension, why hasn’t a modified naturally-aspirated FRS/BRZ/86 ever done a 1:19 around TMP?

A huge thanks to Daniel Cocar for the pictures, the data, and the opportunity to learn. 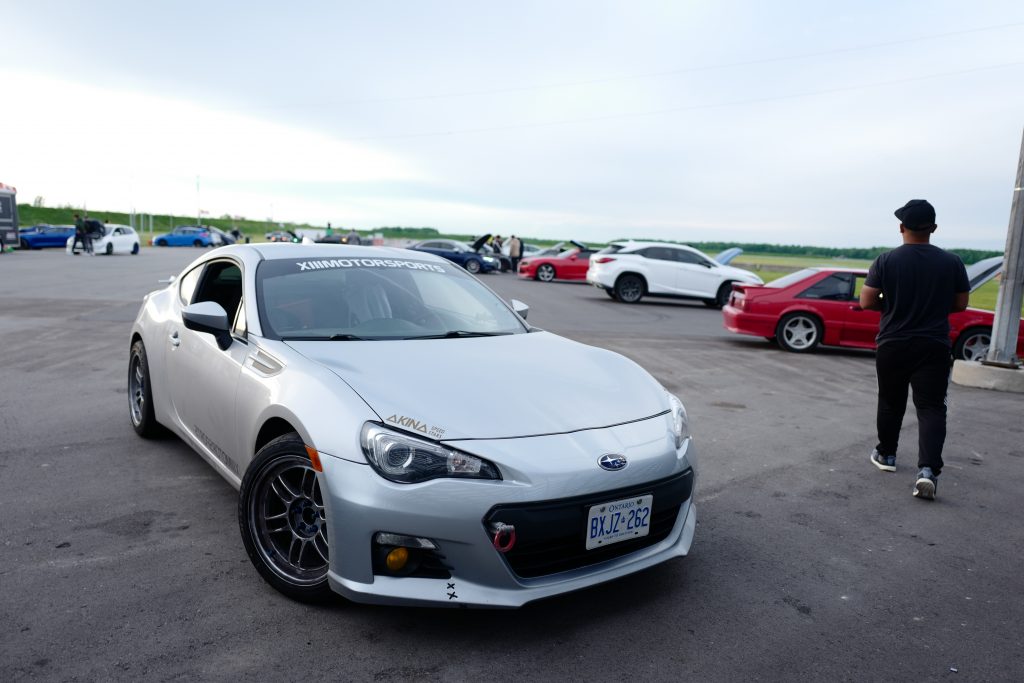