The day started early. I uncharacteristically felt wide awake at 4:10 in the morning, even before the first several alarms I had set. By 5am, my friend Samee had arrived and our three-hour drive to the Rally of the Tall Pines had begun.

Rally of the Tall Pines is an annual celebration of Canadian rally culture, where rally cars battle on dirt, gravel, and snow in an attempt to survive the treacherous course, and potentially snag a spot on the podium at the end of the weekend.

I know about as much about Rally racing as I do about ballet; and that is, not much. I therefore enlisted the help of Drew Geier, a die-hard rally enthusiast and owner of both a rally-prepped, daily driven WRX and an Alfa 75 Rally project car. Myself and Samee met up with Drew in a parking lot overlooking a power plant and Ontario corn fields. From there, we made our journey straight north, and Drew in his WRX promised to take the ‘fun roads’ on our way towards Bancroft Ontario. 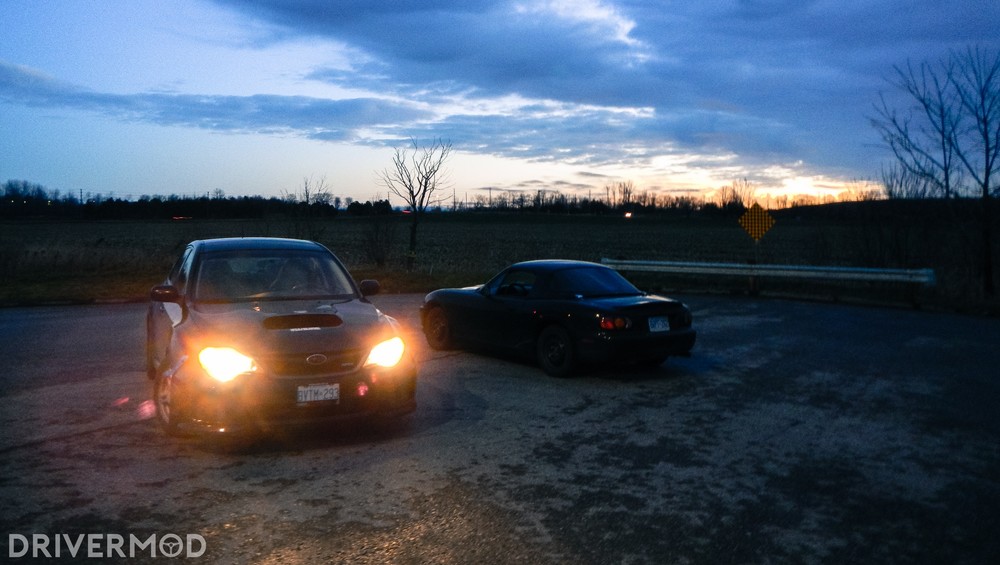 An hour and a half and several coffees later, I found myself chasing a WRX through twisty back roads of an equal mix of dirt and asphalt. After Drew’s verbal bashing of my Miata over breakfast, I made a point of keeping him close through stretches of asphalt service road, but once we hit dirt my skinny winter tires were doing me no favours. Stay in a low gear, keep the revs up and use throttle to rotate the car, I told myself. I was just 10am and we’d already broken traction several times over. 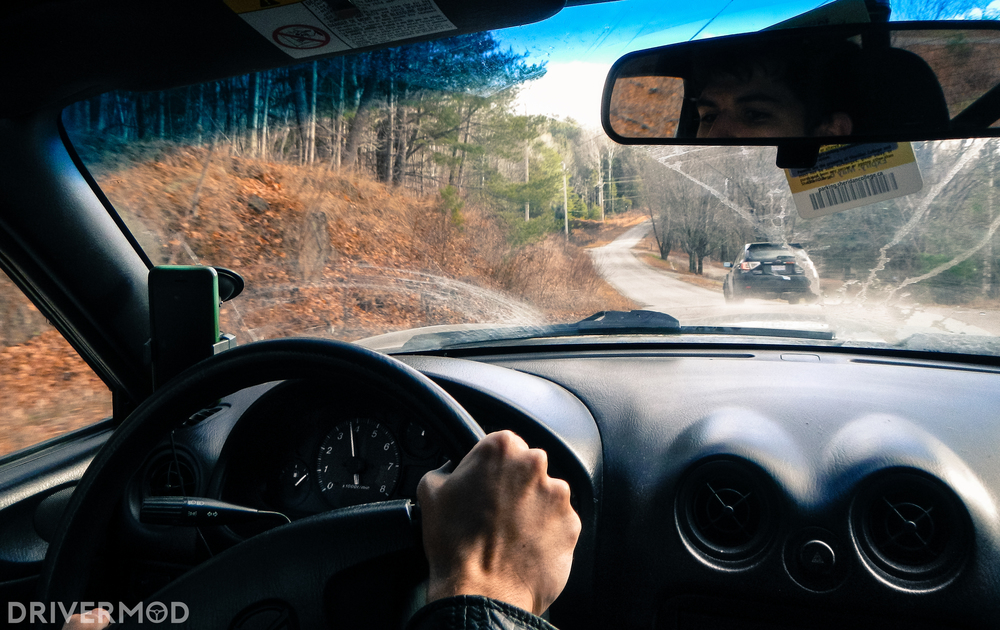 At the rally, the scene felt strange – Subarus and crossovers littered the area and Drew gave an obligatory wave to every Subaru owner he came across. They all had beards, they celebrated rock chips and mocked contemporary car culture and it’s affinity for big wheels, low ride height and non-existent suspension travel. Sections of the area were taped off to allow for 100+ kph off-course excursions to occur without hitting excited rally enthusiasts. It wasn’t a safety thing one veteran explained to me, flesh caught in radiators does awful things for cooling, and blood and guts on windshield obscured visibility. 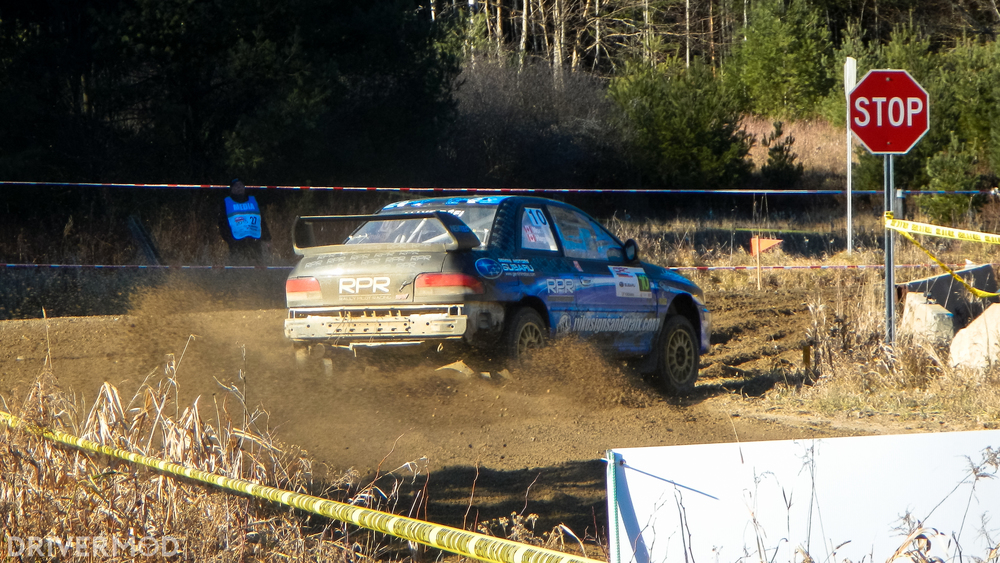 Pretty much anything goes in rally racing, Ford Fiestas, VW Golfs, obviously a ton of Subarus and Mitsubishi Evos. Notable mentions include a S13 240sx, and a Mitsubishi Mirage with an Evo drivetrain. The lack of Miatas seemed strange, and I vowed to build Miata rally car someday.

“Given the overly-regulated state of many motorsports today, it’s breathtakingly pure”

The rally was a little bit like autocross, except I was cold, everybody had beards, oversteer was celebrated and encouraged, and you didn’t get to drive but rather watch a lifted Subaru go by every few minutes. On that note, it was time for the finest Bancroft pizza, and to try out some rally-style driving ourselves. Drew picked out the road and led the way, and things escalated very quickly. My speedometer climbed towards triple digits as the twisting asphalt ended and became smooth packed dirt. We flew through smooth chicanes and long sweepers as I tried my best to stay out of the ditches and trees that threatened to ruin the day. Steep hills approached and the Miata got terrifyingly light, spinning tires over the crest and I pressed on motivated to keep up with the turbo-charged, all-wheel drive rally machine in my headlights. Mercifully the road ended with a clearing, where I paused to catch my breath and ponder the lunacy that is rally racing. 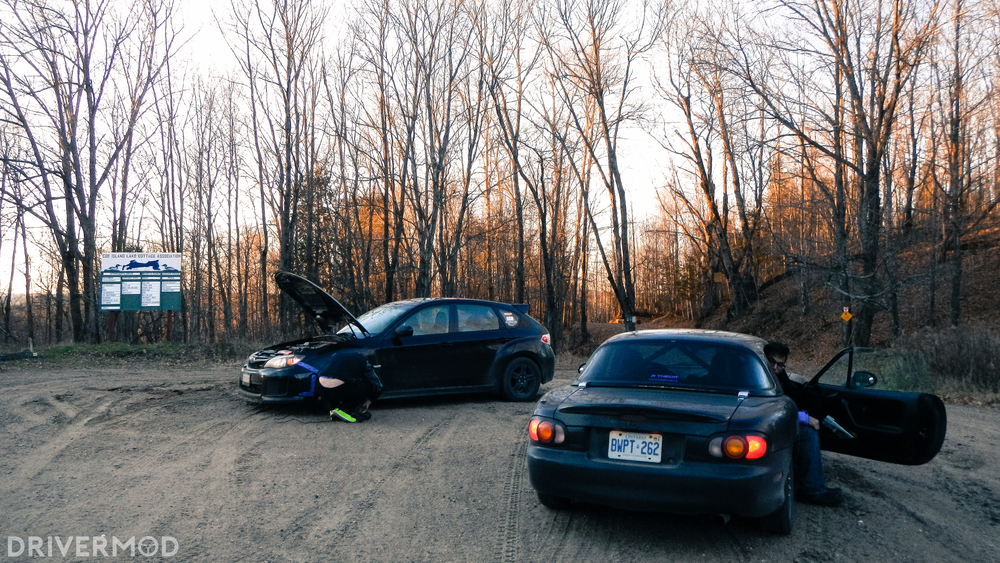 Road racing may generally be faster given the absurd levels of grip available, but racetracks have runoff. At an average track day at the Toronto Motorsports Park a spin out involves nothing more than getting back on the track, assessing what damage, if any, had occurred, and trying again. In rally racing, your ‘runoff’ is more often than not a tree. Crashing is customary and rolling a car is almost seen as a badge of honour. Not only are grip levels kept low, with stages being comprised of a mix of snow, dirt, gravel and asphalt, but the stages are constantly changing. 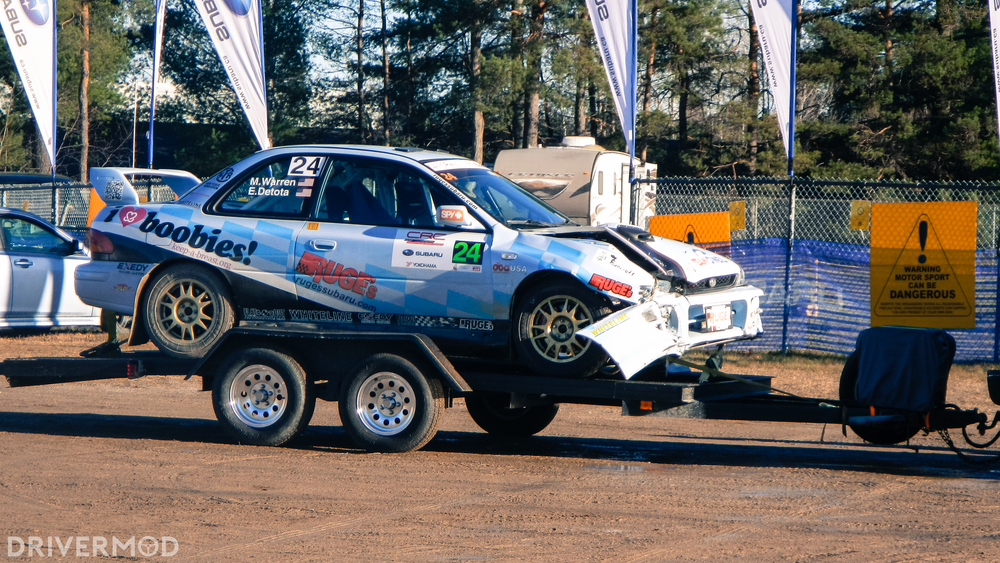 In a typical rally drivers head up the day before and are given one drive through the stages to make pace notes. Rally folks call this a “recce”, short for reconnaissance. The next day, they hit the stages at ten tenths. Not only could things change dramatically overnight, but a snowy stage at the beginning of the day could turn into near solid ice, and you have no idea what the surface is like until you hit it going 100+ kph. Throughout the day, one thing became clear: rally driving goes beyond skill; it comes down to downright faith. Faith that the packed dirt the night before hasn’t turned into a bog over the past 12 hours, faith that a crazy spectator won’t wander out in to the road as you get airborne over a hill, faith that your brakes wont fail as you head straight towards the edge of a cliff at 200 kph.

I had the chance to speak to WRC driver and Drew’s own rally instructor Leonid Urlichich, known as Crazy Leo later in the day. He attended as a spectator as his car was currently in pieces after an incident in Spain. The charismatic Russian spoke nonchalantly about how the brakes on his R2 Ford Fiesta failed entering a right hand corner on an asphalt rally stage. In an attempt to slow down, he pushed the little Fiesta into the barrier to his left. He ended up hitting a concrete wall that separated him from a several hundred foot drop off a cliff, at 120kph. The wall ended up taking serious damage. Yet had he been going 5kph faster, the wall would have failed, sending the little Fiesta tumbling into the Spanish countryside. Naturally, the Fiesta was totaled.

The day ended with a tour of the service area. Rally teams works furiously to repair the beating the cars had taken. A local informed me that if I saw them with wrenches, things were going well. If the crew brought out hammers, things were bad. Subaru unapologetically dominated the event and spokesmen wandered around offering posters and pamphlets in an attempt to make Subaru loyalists out of clueless Miata owners like myself. I gladly accepted all I was given as they came with free hot cider. 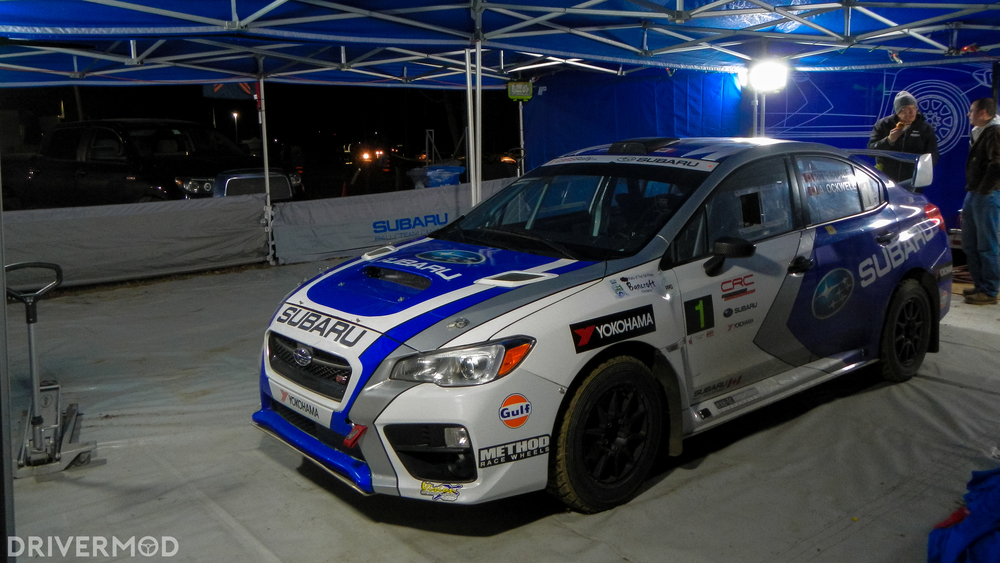 At this point, I chugged a Redbull and we made our way back towards Toronto. The event was over and I was grateful that the Miata was in one piece. One thing was certain; this wouldn’t be the last rally id be attending. Given the overly-regulated state of many motorsports today, it’s breathtakingly pure. Live on Subaru fanboys, I salute you.

Special thanks to Drew, also known as Melons for joining me. You can check him out on Car Throttle here.

You can find High Res. versions of these pictures on our Flickr. 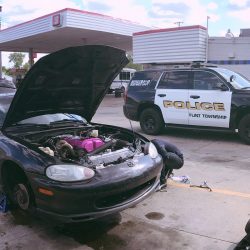 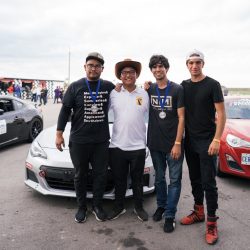 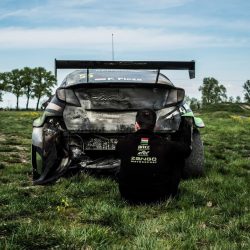 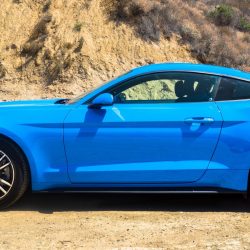