I Wanted to Hate the Scion FRS. Then I Bought One.

If you look past Scion’s millennial-pandering, you’ll find a bargain-bin crazy good, usable sports car in a world filled with crossovers.

When the world was introduced to the Toyobaru twins in early 2013 via Top Gear, I saw the twins as an example of Japan’s commitment to building shamelessly underpowered cars masquerading as sports cars.

I imagined a Toyota boardroom full of Japanese businessmen chewing on cigars. Akio Toyoda swings around in his leather-wrapped armchair, slams his fist on a thick mahogany table and declares ‘We need to save Scion!’.

A slim executive wearing a slightly-too-large three-piece suit sheepishly raises his hand and says “Well, we tried to attract young people by building a bunch of affordable boxes that come in fancy colours.  Why don’t we build a sports car?”

Akio scoffs at the idea, puffs on the roll of Cuban tobacco and exclaims “And how on earth will that make money?”.

The young executive smiles. “We won’t build them. We’ll get Subaru to do it. Then we’ll turn around and sell them at a profit.”

Akio, now genuinely impressed with the idea turns to the young executive and asks him what they’d name such a sports car. “Well, I was thinking “FRS” – front-engined, rear-wheel, sports…”

“Alright alright, we get it. That’s a terrible name but fine. Let’s do it.” – Akio, probably. 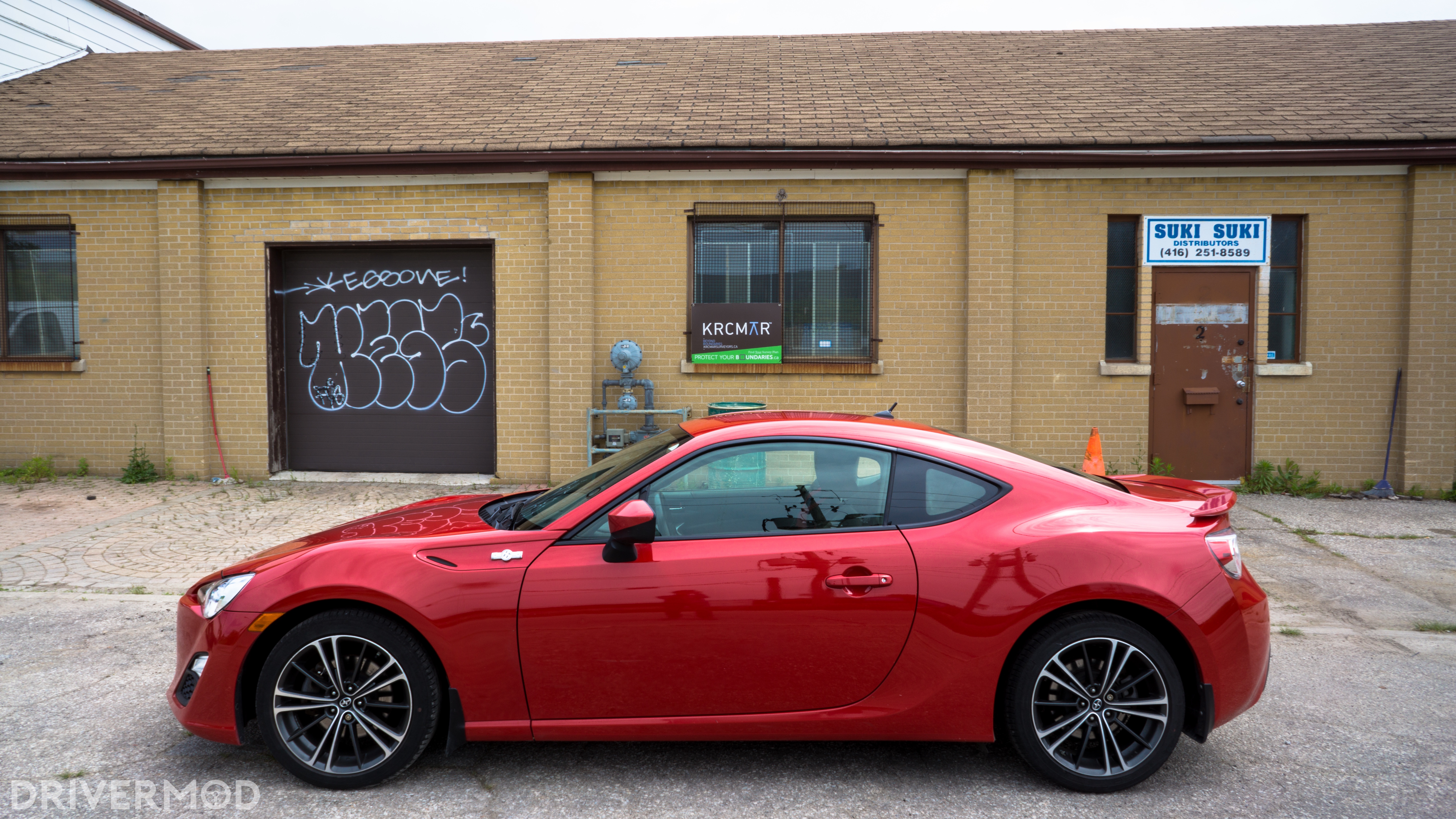 Then I learned about driving, did a bunch of autocross and track days, and bought a Miata. I understood the FRS, but I didn’t understand why someone would buy one over a lighter, cheaper, double-wishbone equipped, used-Miata. Then I ruined my Miata with a shoddy engine swap and mods that made street driving unbearable, and I bought an FRS.  The decision was mostly an economic one. After years of living with a two-seat shoebox with a milk-carton for a trunk, I wanted something with a backseat, that wouldn’t beat me up on DriverMod road trips. For reasons that even I have trouble explaining, it came between a BMW 1-Series and an FRS. Obviously, the FRS is plain cheaper. Cheaper parts, cheaper on gas, cheaper on insurance. In other words, I bought a car using the same logic you’d use to decide between bags of milk.

Initially my favourite things about the car were comically boring, like it always started, it got good fuel economy, and it was quiet. Hell, it has power windows, air conditioning, and a fancy tachometer that swings to redline on start-up. Then I drove at ten-tenths at an autocross, and it obliterated any expectation of how good a factory sports car at this price point could be. 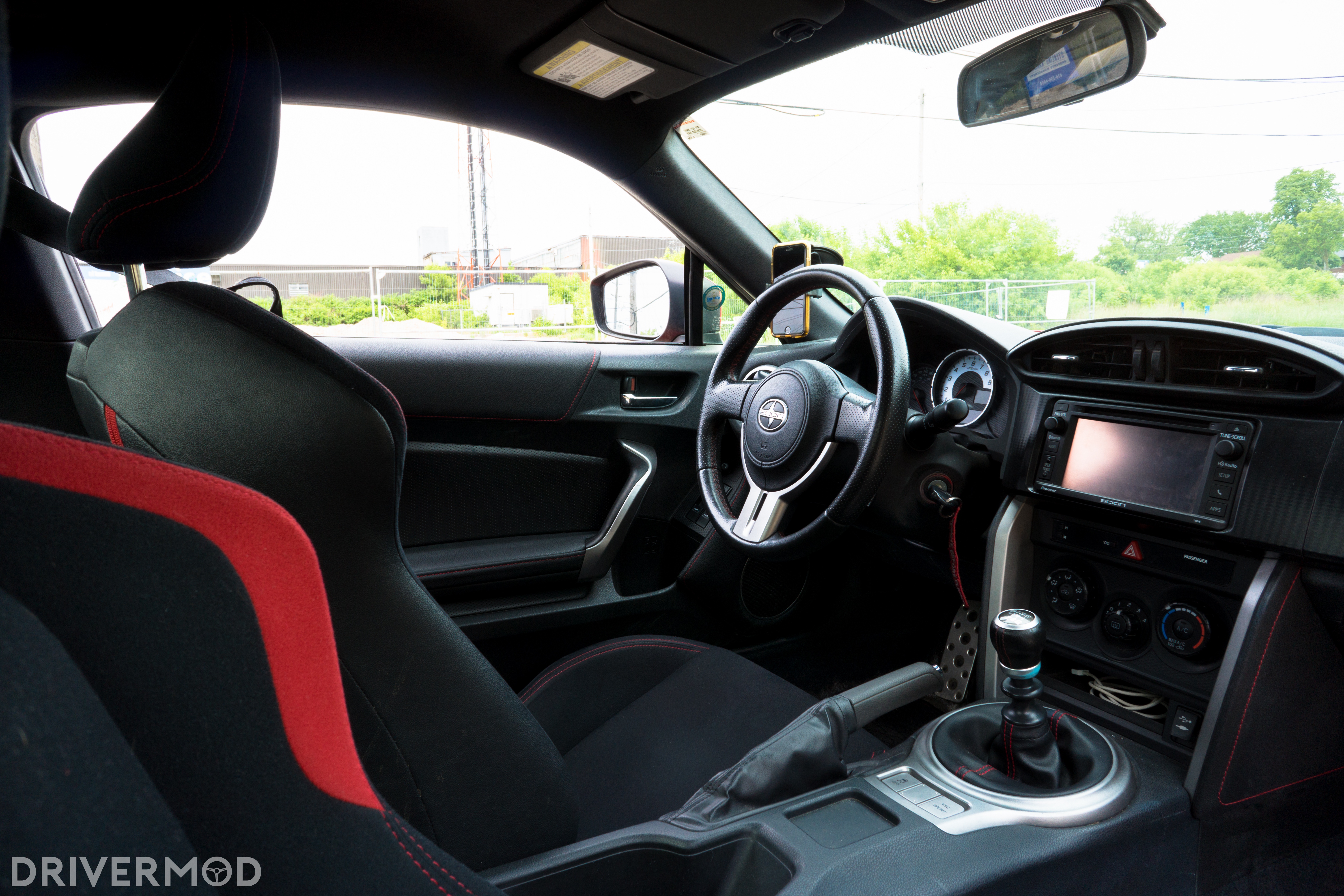 Forget everything you know about the FA20. It’s an all-aluminium, 12.5:1 compression, 16-valve 2.0 flat-four making 100 hp/litre at a screaming 7000 rpm. If this engine came out in the peak of early-2000s VTEC madness, it would have been a legend. In today’s world of fat, turbocharged torque curves, not so much. A large part of that is Subaru’s fault. Much to the bewilderment of virtually every auto-journalist alive, Subaru released these cars with a hole in their torque curve around 4000 rpm. In other words, daily driving territory. A hole that can be fixed through either a header and a tune, or by revving the nuts off the car constantly. I prefer the later approach.

Then there’s the sound of the thing. It’s rough, guttural; like a Honda K20 that’s been chain-smoking since the late ‘80s. It’s good in doses. Less so when you’re trying to look like a real adult in front of your passenger. 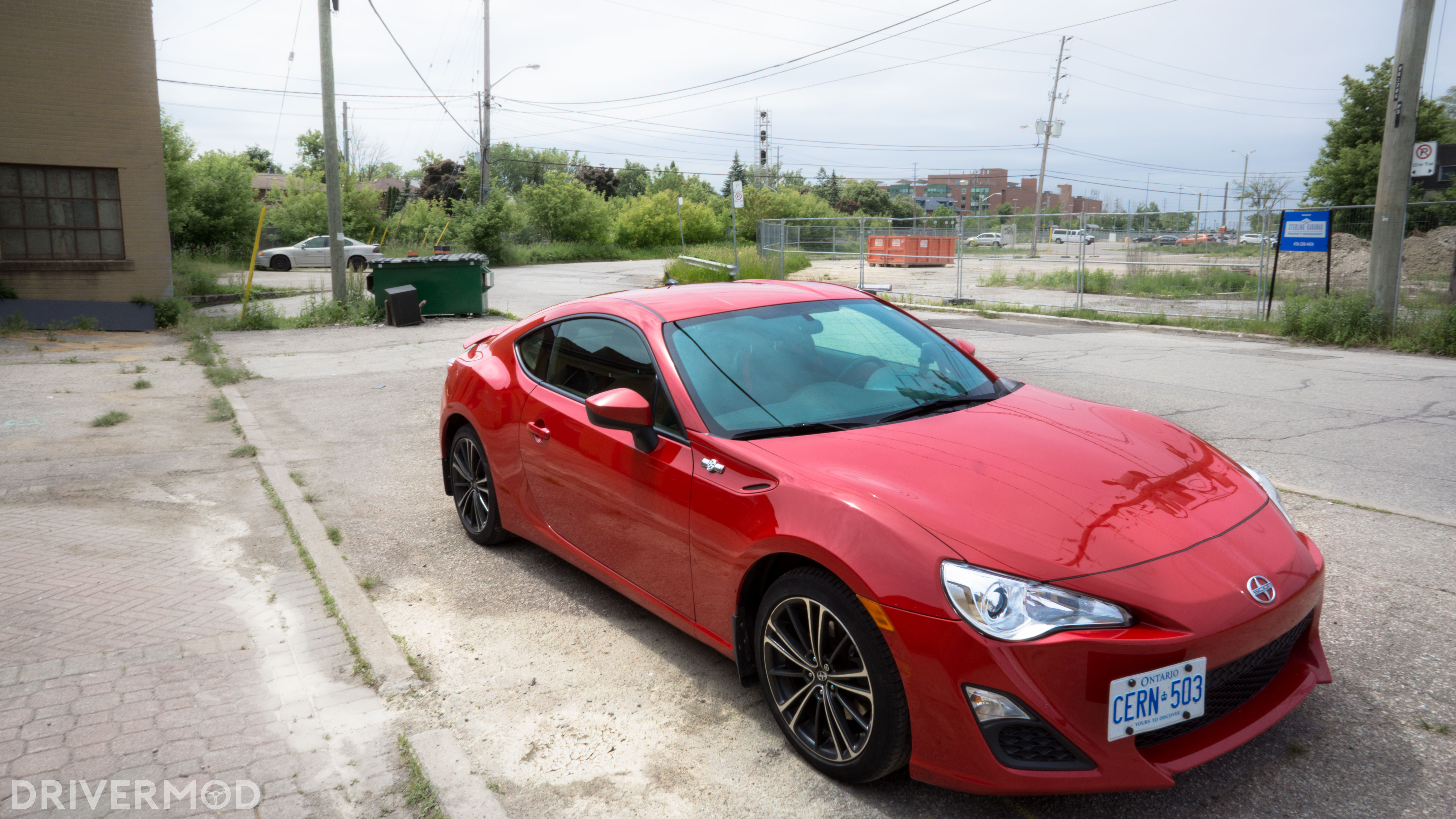 Then there’s that whole boxer-engine-thing. Placed ultra-low, it results in a center-of-gravity of 18.1” inches off the ground. In other words—look at your shins. That’s lower than a Cayman, a GT-R, and you guessed it, an ND Miata. But those are numbers, and numbers are bullshit. To understand the Scion FRS, you need to drive it at the limit on the factory Michelin Primacy, god-awful summer tires.

Tuck the car to a corner and first you’ll notice the surprisingly heavy, strangely communicative electric power steering sending ever whimper of those low-profile Michelins straight to your fingertips. Feed in power and the rear will dance and squirm and beg to step out of line. Get it all right and the sheer balance of the thing will leave you grinning from ear to ear. I never really understood the phrase steering with throttle until I drove the FRS at 10-tenths. It’s neutral – neutral in a way you’d never expect a multinational conglomerate like Toyota to allow for fear of lawsuits from concerned parental advocacy groups. 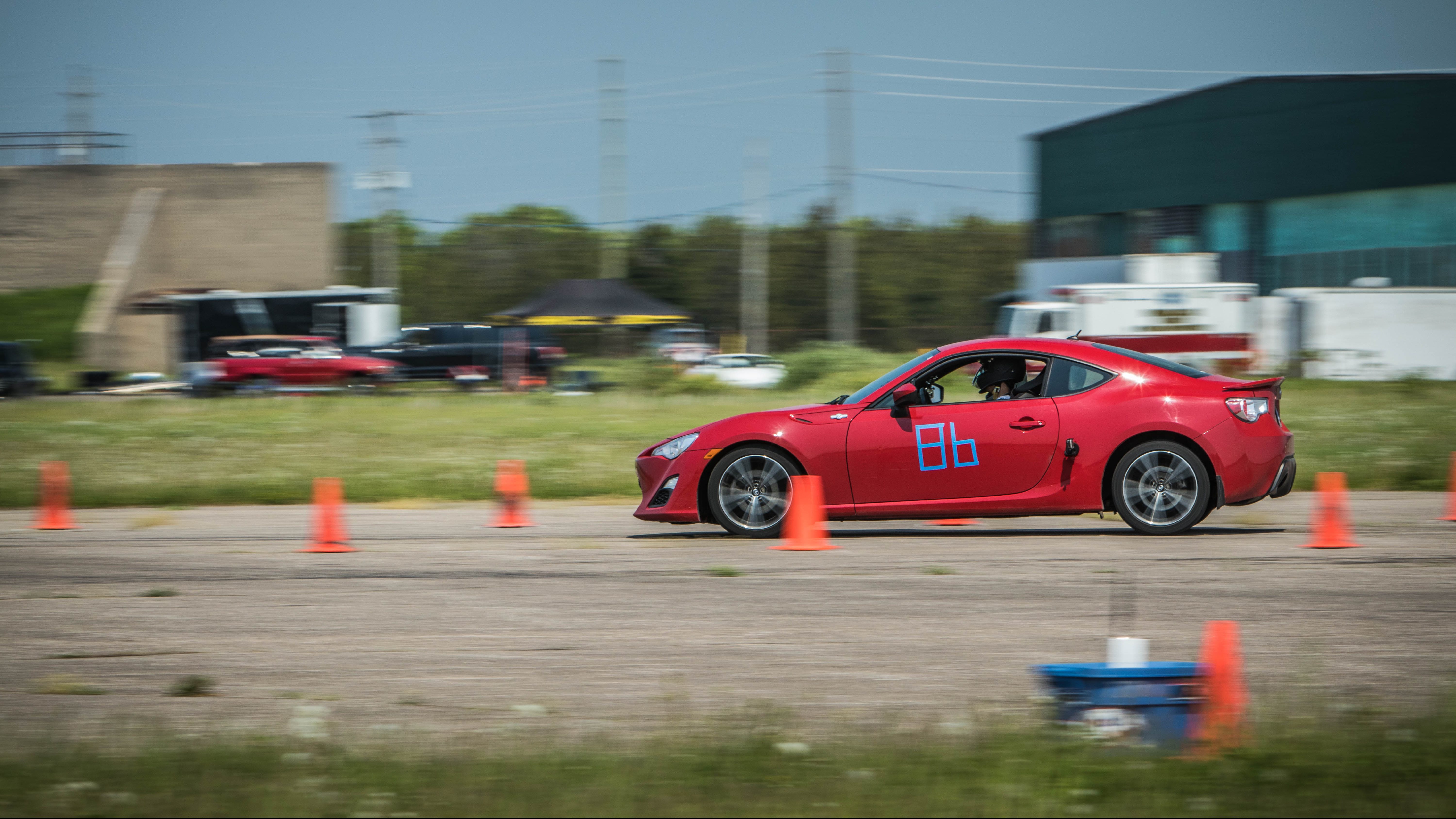 The best thing I can say about this car is it’ll teach you about driving. You can show up to an autocross, meander your way around the course scrubbing the front tires, end up ten-seconds slower than a GTi, and hop out and blame the terrible tires and the torque curve. Or, you can practice, learn, and become the best damn driver you can. Then go out there and draw the perfect line, slide the car around and kill it. The FRS isn’t a car for excuses. You can’t lean on an excess supply of torque or massive grip to get by, but drive it right, and it’ll reward you. If that sounds reminiscent of a certain Mazda-roadster, it should. It’s Miata good, but without the nonsense of living with a Miata.

Nonsense like being able to carry a damn set of tires, because you’re a car person and you go through tires more frequently than most people replace underwear. Yes, you can carry a set of tires in a Miata; two tires in the passenger seat, one in the trunk (tied shut) and one tied to the rollbar—been there. Then pray you don’t get t-boned and take a tire to the face, or more likely, it rains. That’s what it’s like living with a Miata as your only car. Bliss until you end up having to carry more than a few bags of groceries, and you end up having to either call in a favour or do something stupid. Then there’s road tripping—which is a combination of wind noise and 4000 rpm cruising. That’s not even mentioning the whole no-back-seat thing. That’s not to say that FRS isn’t compromised. It’s extremely compromised; just significantly less so than it’s only real rival. 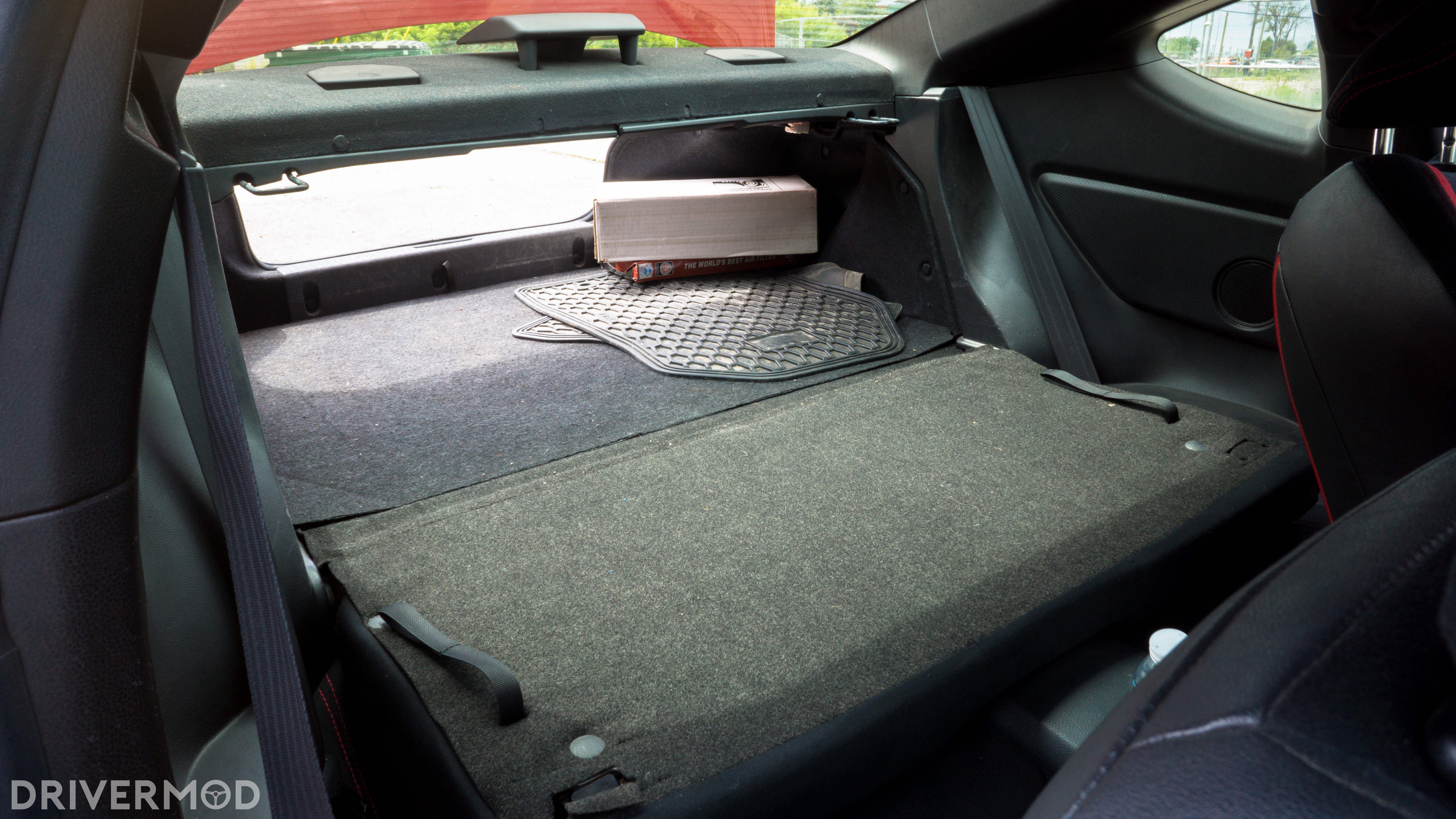 There’s that back seat, which can be used—assuming you harbour at least some resentment for whoever you’re putting back there. Suspension is firm – aftermarket coilover firm. The car bumps over small cracks in the pavement and crashes over potholes. The seats are, you guessed it, firm. You can’t build a 2700 lbs 2+2 sports car in 2018 without ditching every inkling of sound deadening.

I need to take a moment to mention the amount of sheer bad design that went into the FRS. There’s the speedometer, where every speed you’ll legally hit is tucked within the first third, which goes on to read a laughably optimistic 160 mph. The infotainment system is slow and buggy, traction control can only be turned off while the car is stationary, and worse yet is the fact that the FRS looks so inappropriately angry for a car that’s so childishly enjoyable to drive. 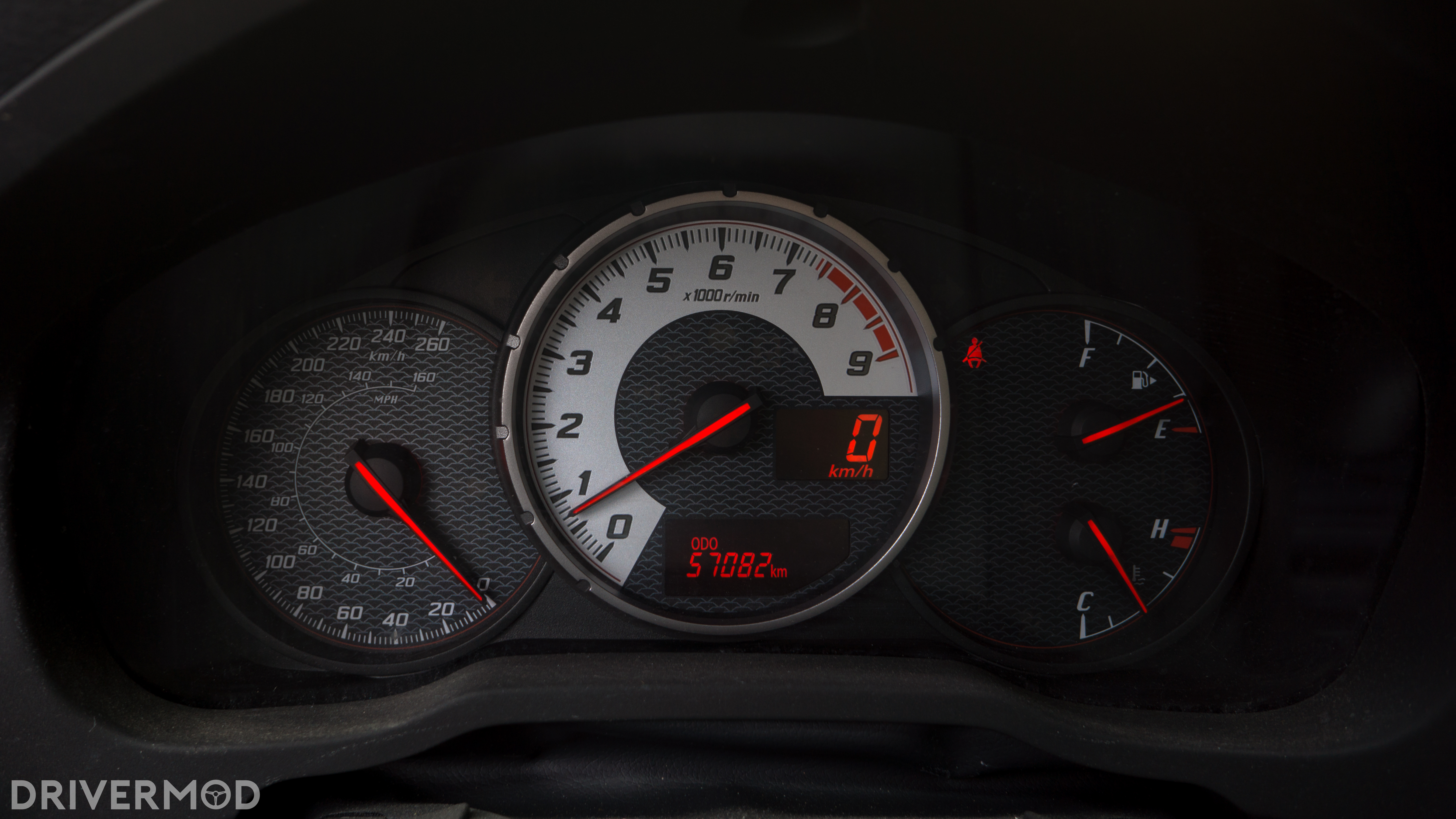 Then there’s the general sense of cheapness. After just four-years of existence, my shift knob is missing a sizable amount of paint, the steering wheel’s finish is flaking in places, the windows squeal when you lower them after a rainfall, and the fuel pump produces an incessant chirping noise Toyota has somehow deemed “normal”. The paint is so thin I swear staring at it hard enough will cause rock chips, and Toyota didn’t even bother giving us an armrest—there’s just a plastic tub between the seats.

But that’s okay because these things are cheap. I picked up this one for $15,250 (Canadian), with just 54,000 kms and a year left of warranty. That’s fifteen grand for a fantastic, modern, warrantied, reliable sports car. And a sports car that you can live with. Not “live with” followed by a chuckle and an elbow to the ribs of your closest truck-owning friend. I mean ‘put people in the back, fold the rear seats, haul around Ikea furniture’ live with.

In short, Toyota set out to build a car for us: the twenty-something, childless car enthusiasts who are just adult enough to appreciate a flat-folding backseat on weekdays, while driving flat-out on weekends. And in 2018, where cars are being replaced by crossovers left, right and center, the fact you can still buy a sports car that’s this good for this cheap, is cause for celebration. If that means accepting a little corporate pandering, so be it.