Shortly after we released our article outlining the costs of building and running a ChumpCar, Ken Wong, the manager of Junction Autosport messaged me, inviting us to join his ChumpCar team at their next race at the Calabogie Motorsports Park. Naturally, my response was “Heck yeah.” What’s a ChumpCar? Buy a cheapii beater, bolt a roll cage and a wack load of safety equipment in, and go endurance racing. To even the playing field, ChumpCars are divided into classes using a point system that allocates points based on modifications. 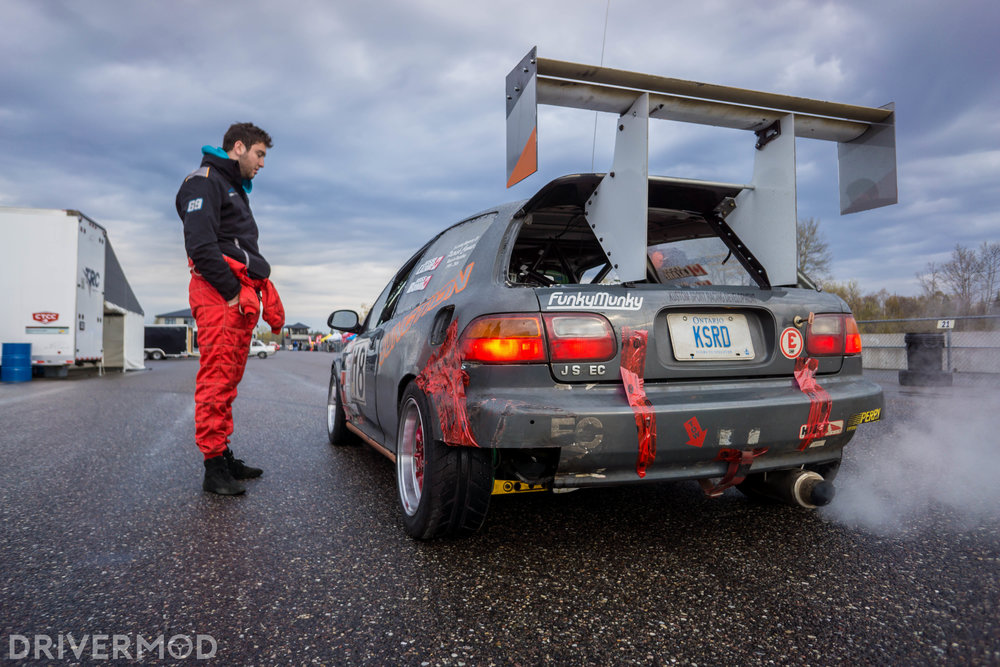 The Junction Autosport team runs two Civics; both EGs. Car 18 (aka the fast car) features a B20 with vtec and a massive rear wing, and car 81 (aka the slow car) features a vtec-less B20. Both cars were in “EC” class. (a class for cars that don’t fit into a class) Naturally, both cars have full roll cages, fire suppression systems, kill switches, and anything else needed to make the ChumpCar legal. 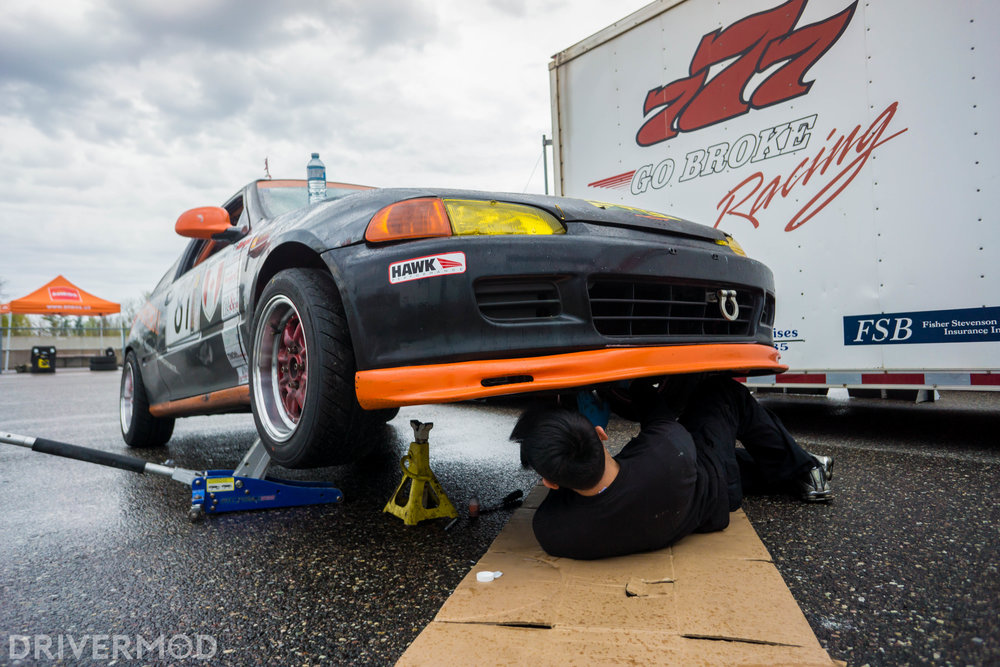 Our day started with a 6:00 am driver’s meeting that covered timing for the day, along with any special last-minute rule changes. At this race, there was only one item of interest; no minimum fuel stop length. Normally at ChumpCar, fuel stops needed to be at least five minutes long in-order-to encourage slow and careful fuel changes. In terms of racing strategy, this meant that we wouldn’t get the luxury of extra time for tire changes and oil top-ups. With that over with, we joined Ken and the rest of the team while they made some emergency adjustments; specifically, the slow car was suffering from a pesky exhaust leak that Ken attempted to seal. With the cars as ready as they’d ever be, the cars got lined up.

At the start, it quickly became apparent that our biggest problem would be the weather. It had been raining steadily throughout the day, and even with no side or rear windows on either car, windshields were getting badly fogged up to the point where visibility was next to nil. That’s when we started having real problems. Our fast car ended up smacking Team Rollin Coal’s Golf TDI, taking a chunk out of the Civic’s bumper and causing the Golf to spin out. Back in the pits, we brought it in and patched its bumper with the highly advanced material known as “tape.” We also applied shaving cream to the windscreen, an old ChumpCar trick that was supposed to help with our fogged-up windshield. With a full tank of fuel, we sent the car back out.

Two more fuel stops and shaving cream attempts later and we had our first failure of the day. The slow car wouldn’t rev past 4000 rpm so, we tried swapping out it’s ECU during a fuel stop but that ended up doing precisely nothing. Both cars also don’t have thermostats that would normally tell the ECU when the engine is up to operating temperature, so the team suspected that given the rain and cold temperatures, our slow car just wasn’t getting up to temperature. Given that logic, they blocked half of the radiator with cardboard. Two laps later and the radiator blew in spectacular fashion. 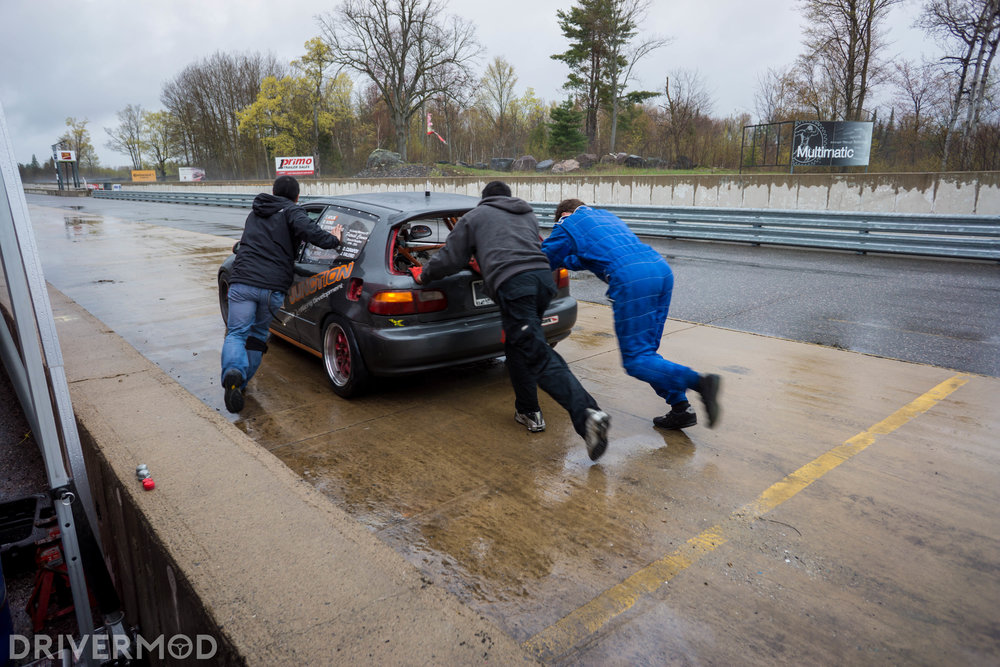 Oh yeah, and our battery sucked.

We were able to convince another team to give us their half-radiator from a different year Honda, which was fastened to the car using zip-ties, but the amount of time spent dealing with it meant that competitively, the slow car was out of the race for a podium position. 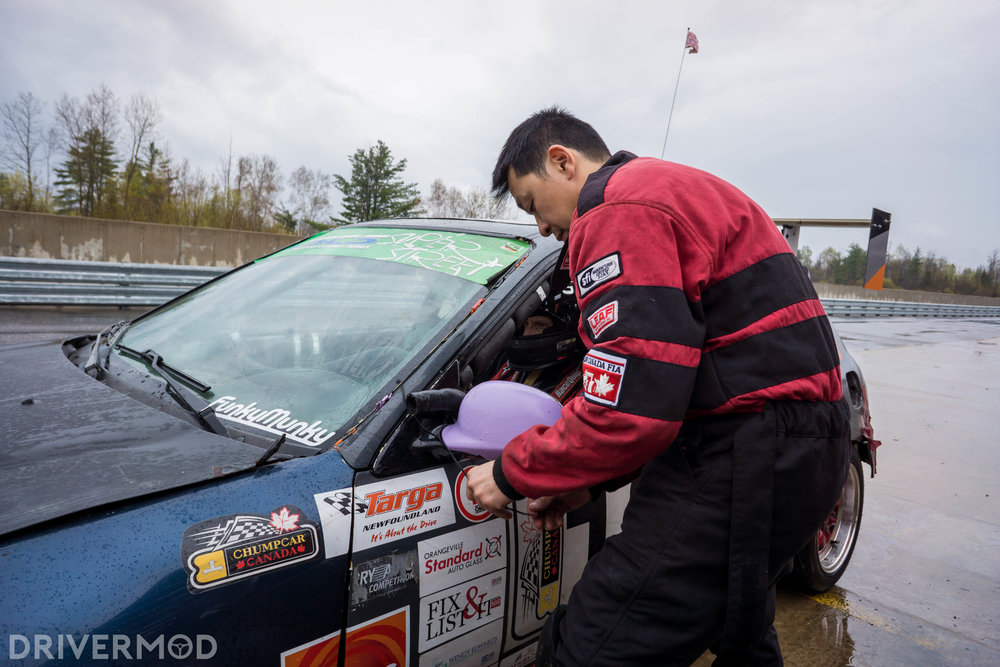 It was also around this time that we found a ‘real’ solution to our windshield fogging problem. A radiator hose zip-tied to the driver’s side mirror blew ram air onto the inside of the windshield, but this presented another problem. Our slow car’s exhaust leak was never really fixed, meaning that this radiator tube was now bringing exhaust fumes into the cabin. 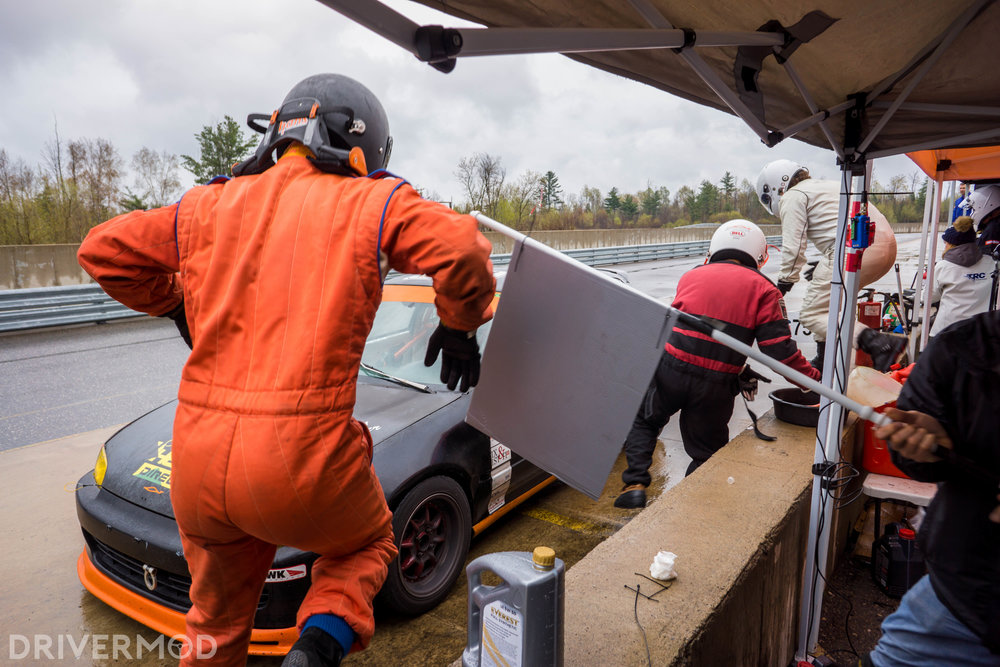 The thing that stood out to me as an outsider was how frantic things were in the pits. The car would come in and four members of the team would leap over the wall; one with a fire extinguisher, a fuel guy, the next driver, and someone to help the new driver get buckled in. It quickly became apparent that efficiency in the pits could make or break the race. Our closest competitor TRC, who raced EK Civics, had vented fuel tanks with fancy looking filler nozzles – we had a jerry can and a funnel. The result was that they took 23 seconds versus our 42 seconds to fill up. If you do the math – a 12-hour race , fuel stop every two hours – they had an entire lap on us purely from fuel stops. 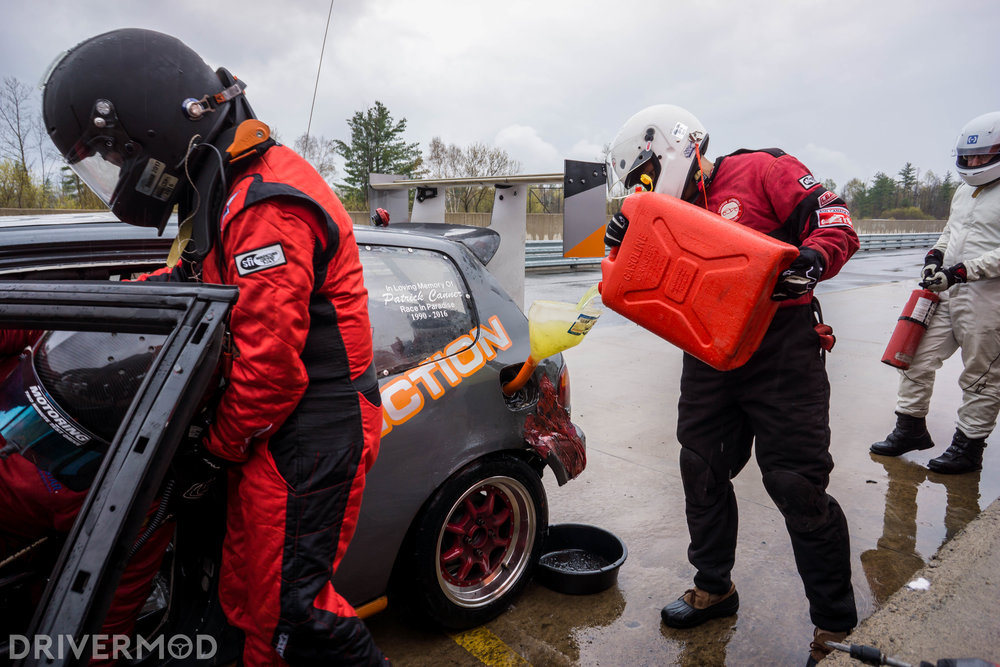 121 and six hours into the race; it became clear that our mishaps at the start of the race. Our fast car, (our only competitive car now) was in fifth place and five laps behind the leader. This is the point where we started to have a real discussion about racing strategy. Ask any racer, any real racer, and they’ll tell you that endurance races are won in the pits.

Here’s how it went: we knew we had another six hours and roughly 120 laps to go. Being five laps behind the leader meant that we had to make up make up 13 and a half minutes, or about seven seconds a lap. We did have however have one, major advantage – we were fast. Throughout the entire race we held FTD (fastest time of the day). It was at this point that we decided to make a bet. Our fastest driver Russ Bond, a veteran racing driver and journalist, reckoned that if we swapped on a fresh set of tires, we could make up the necessary time. The tire change would cost us three minutes, so we would need to get at least a second and a half faster for it to be worth it. 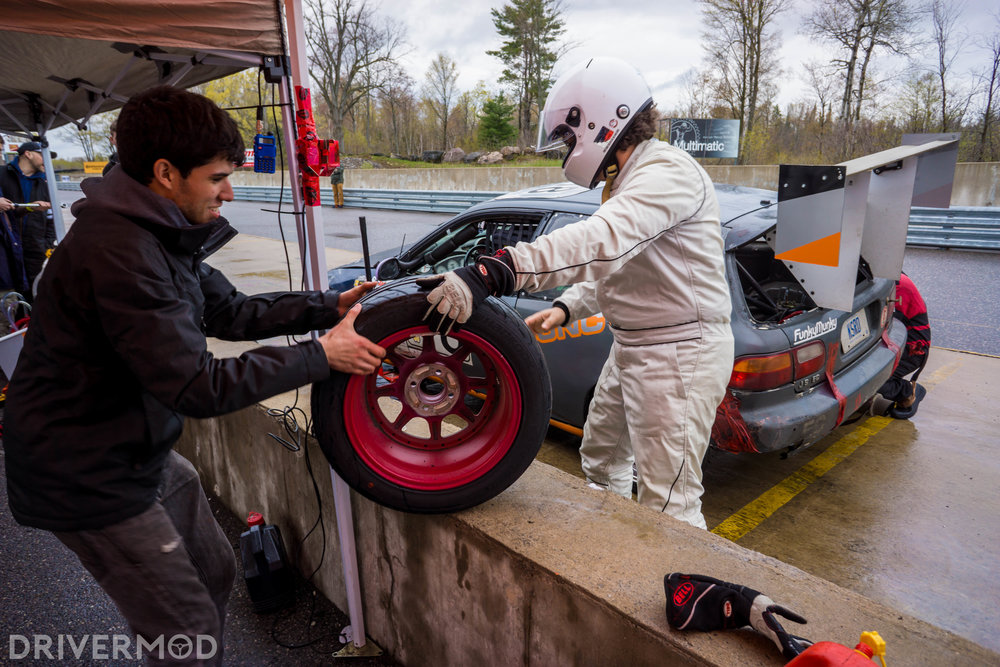 The next stop was a busy one, swapping tires on one side of the car at a time. I made myself feel helpful by feeding tires over the wall. Three minutes and the car was back out. Given the hardware-store-spec tools at the team’s disposal, I was impressed.

Forty-five minutes later and the car was back in for its final stop. The car received a full tank of fuel and Russ, their fastest driver, hopped in for the car’s final two-hour stint.

Soon after, it seemed like our combination of fast tires and a fast driver was working. Now in third place, three laps behind TRC’s EK Civic and on the same lap as car 23, VanWinden Racing’s 325i, our fastest time of the day had dropped by ten seconds; eight seconds faster than TRC. However, with just an hour left, time was running out. At this pace, math told us that we’d need 45 laps to make up those three laps, and well, we were not going to get through 45 laps in an hour. 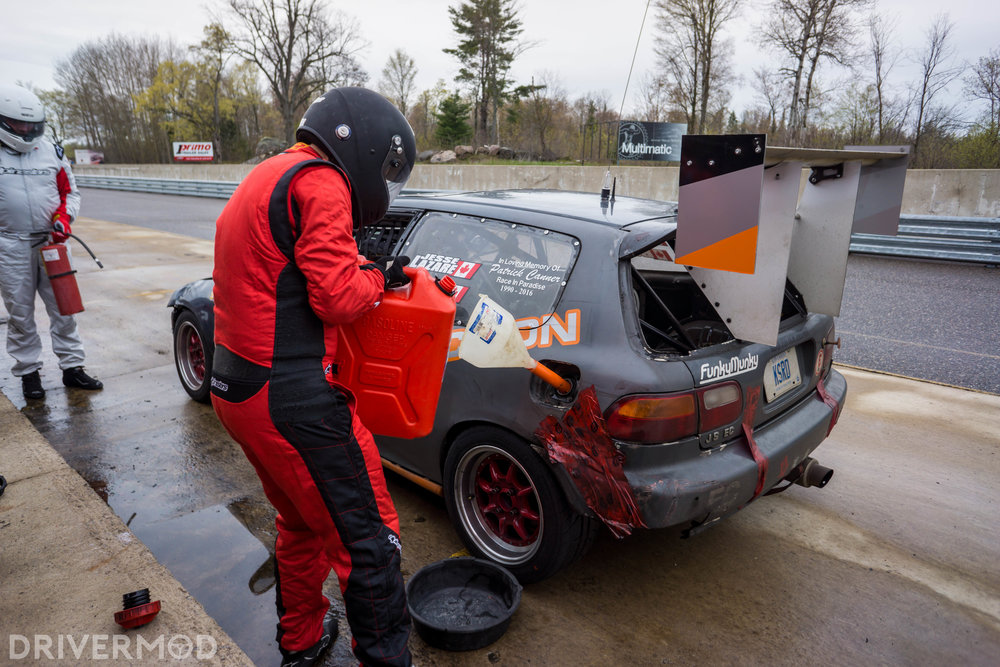 We managed to nab second place, but Russ’ mammoth pace also had its drawbacks. Russ managed to go through a tank of fuel in just an hour and a half, so almost comically we had to stop for fuel just twenty minutes before the end of the race.

With the sun starting to wane, the checkered flag dropped. Team Junction managed to nab second place with the fastest time of the day by nearly three seconds. With the cars back in the pits, we assessed the damage, chatted about what to fix for the next race (a proper defogger system and a fix for the slow car’s 4000 rpm fuel cut) and split for the day. 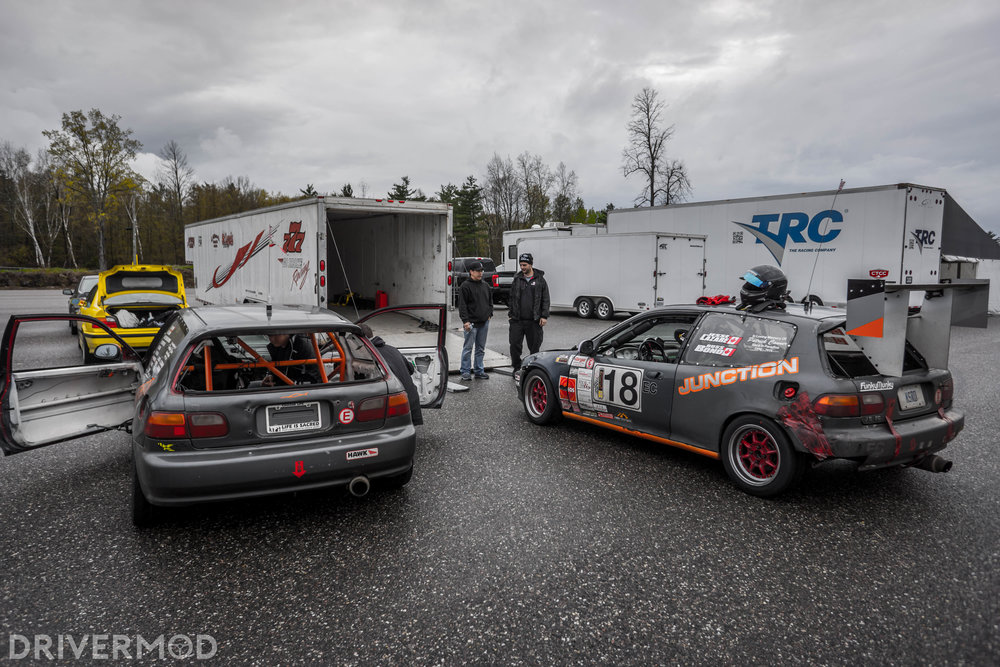 It was an incredible adventure, and everyone worked their asses off to secure 18’s 2nd place finish. I can’t thank the guys at Junction Autosport enough for letting us join their team for the day. They run two wicked fast cars and a tight operation, so if you’re seriously considering renting a seat in a ChumpCar give them a shout. 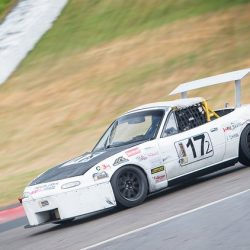 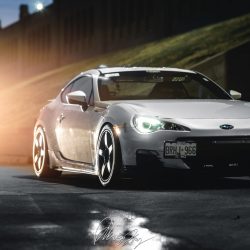 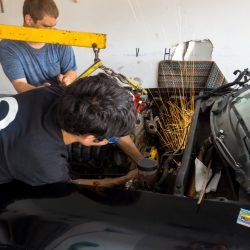 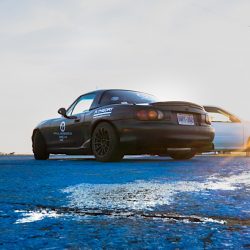